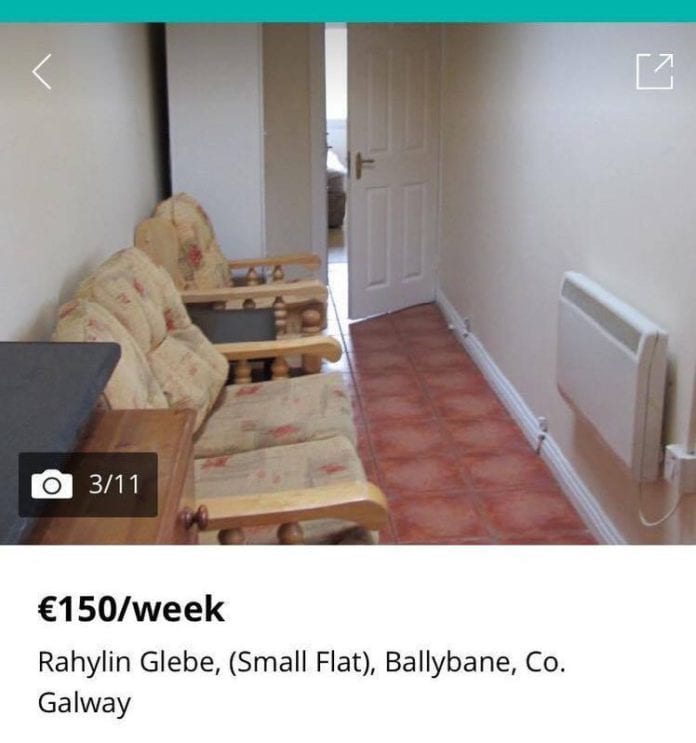 Would you live in a corridor?

Senator Trevor Ó Clochartaigh today hit out at ‘greedy landlords’ advertising a hallway for €640 per month and called for further resources to inspect private rented accommodation in Galway City and County.

The Galway West – South Mayo Senator made the comments after Estate Management Agencies advertised a flat which he said was actually a ‘glorified corridor’.

The corridor is located in Ballybane, Co. Galway.

“It is absolutely disgraceful that Estate Management Companies are advertising properties for greedy landlords who are in breach of standards for rented accommodation and Galway City and County Council must fulfil their duties to stop it.

“I have been shown a property advertised recently by a prominent local property management company for letting in Rahylin Glebe in the east of Galway City, which is nothing more than a dressed up corridor and is almost certainly in breach of the standards laid down in regulations by the Department of the Housing, Planning and Local Government.

“These outline the minimum standards that must be complied with in relation to health and safety for tenants,” he said.

He also labelled Galway City and Council’s record as ‘abysmal’, when it comes to inspecting private rented accommodation.

“According to a report published by the National Oversight and Audit Commission (NOAC) in October 2016, Galway City Council had the lowest inspection rate in the country at 1.3% and Galway County Council was third worst in the country.

“The only properties inspected in Galway City and County were ones being assessed for HAP or RAS payments.

“None of the others on the open market were inspected. Galway City Council also had the lowest staff complement in the country allocated for inspections of properties in the private rented sector,” the Sinn Féin senator said.