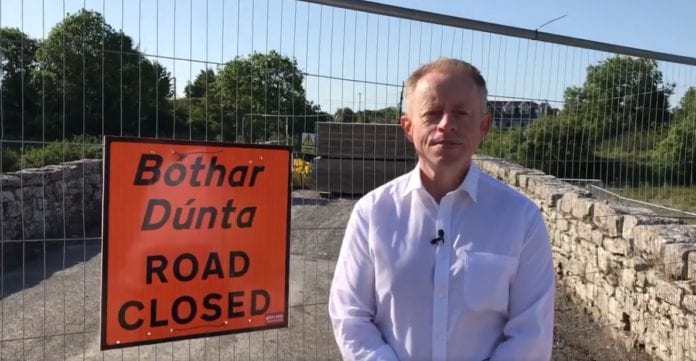 Work on the reconstruction of Dunkellin Bridge can proceed smoothly as the Office of Public Works has confirmed that €200,000 has been made available for the project.

A section of Dunkellin Bridge collapsed last September causing serious issues and extensive diversions for locals in the area.

Galway East TD Ciaran Cannon said that he received confirmation at a meeting with OPW Minister Kevin Boxer Moran yesterday that funding has been secured for the reconstruction of the bridge.

Minister Cannon that a deal was struck with the contractor and Galway County Council to all them to return to work today “so that the reinstatement works can begin immediately”.

“He also informed me that the works will be carried out as quickly as possible and that the completion date will be in the latter end of September,” Ciaran Cannon added.

“I’m very grateful to Minister Moran for his support for this project and I’m equally grateful to Cllr. Joe Byrne and to our local Council staff who have worked hard in planning for the recommencement of these works.”

Funding was secured in February from the Department of Transport to protect what remains of the historic structure while the collapsed section is going to be replaced at the same time.

The protective works will ensure that there are no further issues with the historic structure which dates back to the 19th century, while the collapsed section will be replaced with a new single span bridge.