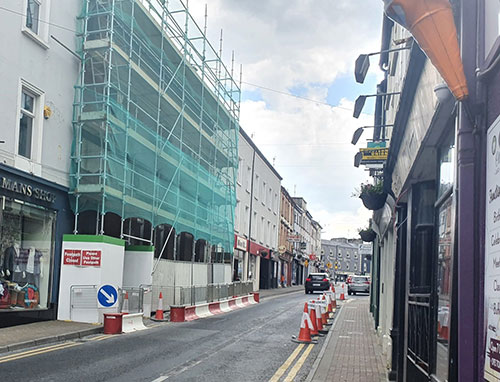 Work on the €2.6 million redevelopment of the old library in Tuam is expected to be completed by October of this year.

Construction work is currently underway on refurbishing the former library for use as an Intreo Centre.

Galway East TD Seán Canney said that “I expect that works which are ongoing will be complete by October this year.”

The building is owned by Galway County Council, which has leased it to the Department of Social Protection for its new purpose.

The refurbishments involve extensive work on the interior of the building to make it into a modern office space, along with restoration of its historic fabric.

On the outside facade conservation works are be done on the wrought iron gate and historic window.

The existing cement fascia panels are being removed to reveal the original sandstone and brickwork design which will be restored.

Other external works include the replacement of multiple non-historic windows and skylights, the removal of a chimney, and the infill of a rear emergency escape.

Inside the library, the work being done includes demolishing the stairs to make way for modern public areas, offices and other facilities.

The works are being managed by the Office of Public Works (OPW) and the main contractor is Finnia Construction.

“The investment of €2.6 million is a major boost for Tuam and North Galway. It also will bring back in use a public building in the centre of the town,” Seán Canney said.

“It will also bring together social welfare services under one roof,” The Independent TD added.

The old building has been closed since the library service relocated to its current home in the council offices back in 2009.