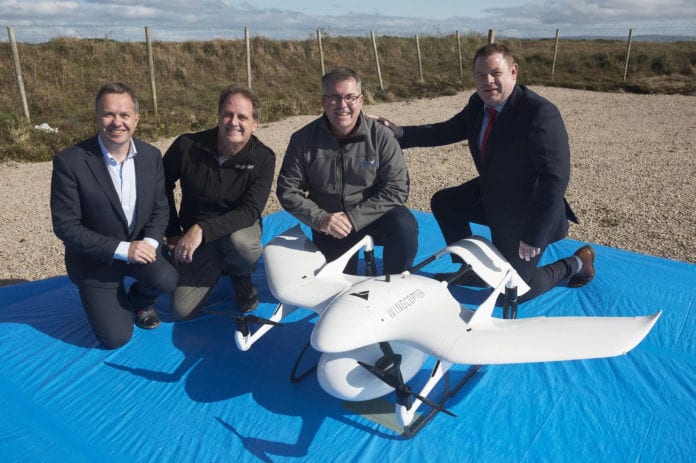 In a world first achievement of it’s kind, insulin was delivered to the Aran Islands by drone thanks to a team led by researchers from NUIG.

The drone flew a two part mission, delivering insulin from Connemara Airport to Inis Mór, and the returning with a patient blood sample.

This flight was organised with the support and permission of the Irish Aviation Authority in order to coincide with a gap in commercial flights.

The team in charge stayed in contact with air traffic controllers at all times during the flight which took roughly 15 minutes either way.

The team behind this project have said that recent extreme weather events like Storm Ophelia and Emma hve shown the need for flexible ways to deliver critical medications during a time of crisis.

Such events are being exacerbated climate change he added, and can create emergency situations where people run out of medication.

“Therefore, it is incumbent on us to develop a solution for these emergencies, which addresses the clinical, technical and regulatory issues before a sentinel event occurs”, Prof O’Keefe said.

“To date medical drones have demonstrated success, for example in delivering blood, defibrillators and human organs for transplant.”

“This #DiabetesDrone project represents another milestone in the use of drones to improve patient care.”

Dr Marion Broderick, a practicing GP on the islands, was enthusiastic about the project, saying that there are “endless possibilities” for drone deliveries.
The drone for this was supplied by Survey Drones Ireland; a Wingcopter 178 Heavy Lift with insulated parcel delivery box for the payload.

Novo Nordisk global pharmaceutical company manufactured and supplied the insulin for the project.

From Connemara Airport the autonomous drone flew a pre programmed flight path to Inis Mór and back using software from the company Skytango.

On it’s way it crossed the 18km gap of water, well beyond the crew’s line of sight.

This was the first time a drone had been used to deliver medication beyond line of sight and return with a patient sample.

Marion Hernan lives with diabetes on the Aran Islands, and she says that having a reliable supply of insulin is essential to her survival.

“Having a diabetes drone service in an emergency situation would ensure this survival while living on an offshore island”, she said.