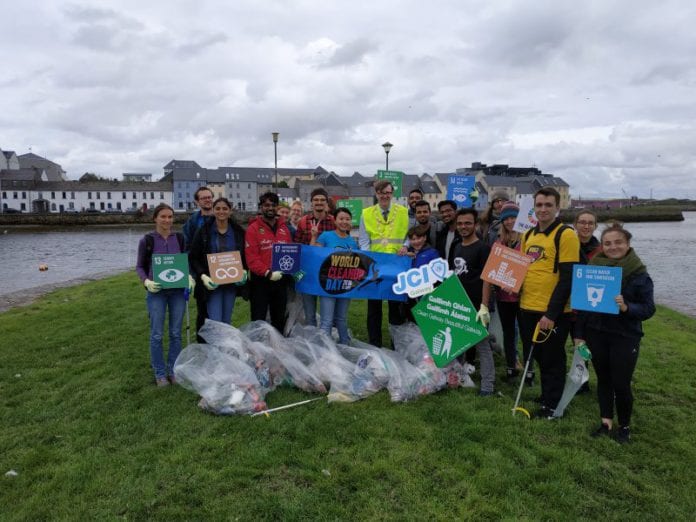 Dozens of volunteers from all walks of life came out yesterday to clean up the rubbish at Galway’s beaches and public areas.

Over 50 volunteers showed up for the World Cleanup Day initiative organised by Junior Chamber International Galway.

They collected over 100kg of rubbish from the Spanish Arch, Salthill, and the Claddagh, parts of Galway are very visible and popular with anyone coming to our city.

Mayor of Galway Niall McNelis stopped by to open the day and interviewed the youngest volunteers of the day, 13 year old Kyle Killilea from St Edna’s College Galway.

Kyle said, “It is very important to take part in the world cleanup day to clean the community because there is nobody else doing it. I want to be the Trash Hero.”

The goal of the World Cleanup Day is to improve waster handling, and to raise awareness locally and globally of just how much rubbish we are spilling onto our streets and out into nature.

Yesterday, millions of people across more than 150 countries decided to do their part in cleaning up roads, parks, beaches, forests, and riversides.

Thousands of communities acted as one, creating a powerful ‘green wave’ spanning from New Zealand to Hawaii.

“We are working with CleanCoast, TidyTowns, Ocean Conservancy today to organize the local beaches and pubic areas cleanups.”

“However, we are not just talking cleaning, but to actually getting rid of the waste. There are 80% of the plastic that floats today in our oceans has come from the land and we have to start there to work with everyone in our community.”