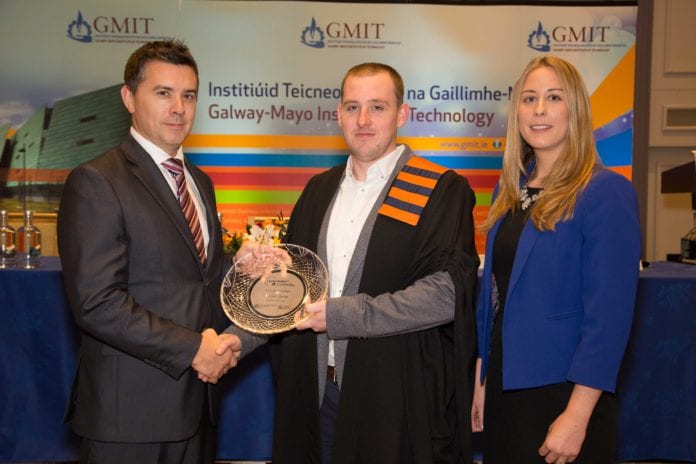 This article was originally posted with an incorrect banner image.

Declan Hynes, an Apprentice Technician at Boston Scientific, has won Student of the Year at a new GMIT course for school leavers and professional learners.

The Higher Certificate in Manufacturing Engineering was created by GMIT in conjunction with Ibec, the Irish Medtech Association Consortium, IT Sligo, Limerick IT and Cork IT.

This programme is meant to allow for early school leavers and those who are already in employment to get a cognitive engineering qualification from a higher education institute.

Keith O’Hara, leader of Boston Scientific’s Apprenticeship Program and Declan’s Manager, said that they are delighted with his success.

“Throughout his learning process, he has been developing as an Engineering Technician while contributing to enhancing Boston Scientific’s competitiveness.”

Declan, from Craughwell, spent 15 weeks per year in GMIT on his academic block, and the rest of his time was spent learning on the job.

Along the way he had the help of his industry mentor Owen Hynes and his GMIT lecturers.

Declan’s hard work was rewarded when he was awarded the Cambus Medical Prixe for best student at an event honouring the first batch of graduates at the GMIT Conferrings in the Galmont Hotel.

Presenting the award on behalf of Cambus Medical, Shane Devoy, Director of Engineering and NPI said “Cambus Medical is proud to be associated with this innovative programme.

“We congratulate Declan and are pleased to recognise excellence in engineering education achievement,” he added

Cathy Gavin from Cambus Medical said “Our CEO, Barry Comerford, a former apprentice himself and Chairman of the Manufacturing Engineering & Technician Apprenticeship Consortium has been one of the driving forces in Ireland behind the development of an alternative, more practical way for school leavers and mature learners to obtain an engineering qualification.”

“The program, initiated by the Medtech Industry, is designed to be a ‘route to engineering’ for employees in any Manufacturing business, it is not just for the Medical space, it is available across all industries.”