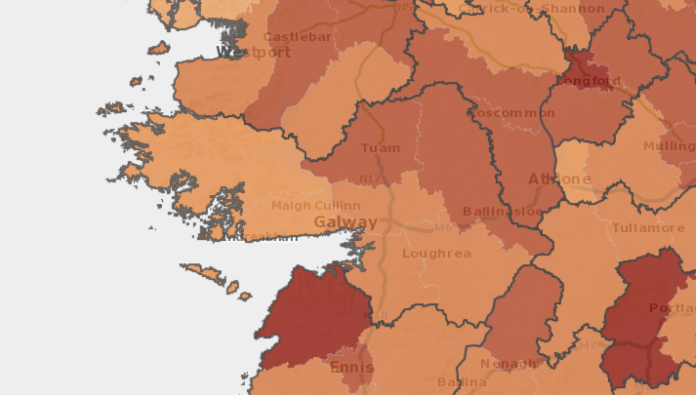 Ballinasloe LEA now has the highest 14-day incidence of COVID-19 in Galway after the rate there jumped to 761 cases per 100,000 people in this week’s figures.

A total of 214 new cases were reported in the Ballinasloe local electoral area in the two weeks to 18 October – more than any other area in the county.

Tuam LEA has the second highest rate in Galway with 612 cases per 100,000 people in two weeks (203 new cases), while the other eight Galway LEAs have rates below the national average – which was 493 when the data was taken.

In Galway city, 335 new coronavirus cases were reported in the two weeks to 18 October, with Galway City East LEA recording the highest rate at 478 (127 new cases in 14 days).

Connemara still has the lowest rates in the county, with just 58 new cases in total across the two local electoral areas in the region in two weeks.

A total of 122 new cases were reported in the Athenry-Oranmore area, taking its rate to 372 – a slight increase on last week.