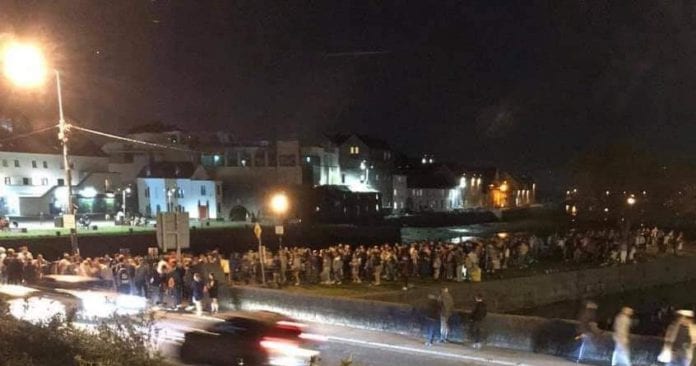 An emergency virtual meeting held earlier today was attended by various agencies and interested parties, after groups of people gathered in the city yesterday evening.

Among those in attendance were the Mayor of Galway City Cllr Mike Cubbard, Chief Executive of HSE Saolta Group Tony Canavan, and Superintendent Damian Flanagan of Galway Garda Station.

They all agreed that the events were ‘completely unacceptable’ because of the lack of social distancing evident from social media posts which circulated last night and today.

The upset, anger and concern of people across the city were shared and acknowledged by those at the meeting.

In a joint statement by all in attendance, members of the community were praised for having made great efforts in the context of COVID-19, and the need for empathy and solidarity in that regard was emphasised.

The presidents of the third-level institutions outlined the work carried out to facilitate a safe return to teaching consistent with public health advice.

They also set out the disciplinary measures available to them in relation to on- and off-campus behaviour and agreed to continue to work with the Gardai closely on such enforcement measures.

These had been clearly communicated to students over the last number of weeks and will be pursued as appropriate.

The Students’ Union presidents say they will continue to use their communication channels to urge students to follow public health guidelines.

Galway City Council will continue to work closely with An Garda Síochána and in particular emphasise that drinking in public is contrary to Galway City Bye-Laws.

The Gardaí are also actively confiscating alcohol which is being consumed in public spaces and will continue issuing public notices which result in fines and possible court appearances.

“It is still vital that people living in, working in and visiting Galway limit their social interactions, maintain social distancing, wear face masks where appropriate such as in shops and on public transport, and not gather in groups larger than outlined in the public health advice,” the Statement said.

“We know the considerable sacrifices people have made during the last six months, but individually and collectively we must continue to do all we can to protect our families, friends and neighbours.

“In these unprecedented times of Covid-19 Pandemic and with the current deep concerns about a possible move to Level 3 of the Living with Covid-19 plan, the meeting appealed to people across the city to ‘Keep it small, keep your distance and keep safe.’”

The group agreed to maintain contact and to convene again if needed later in the week.