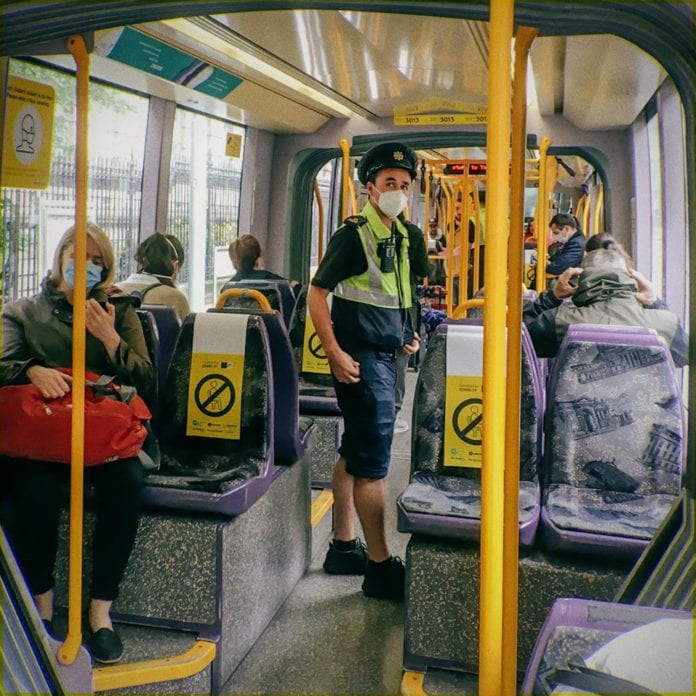 On 12 March, the government shut all schools, colleges, childcare facilities and cultural institutions, and advised cancelling large gatherings. A few days later, the country went into a deep lockdown which saw businesses close their doors in an unprecedented moment for Irish citizens.

The vast majority of people obeyed the government guidelines and regulations, and after a few weeks, we saw the infection rate fall dramatically. At its peak, Ireland had almost 1,000 new cases per day, down to less than 30 per day last week. An amazing achievement for the Irish people and the government.

The government recently introduced a regulation to enforce the use of masks on public transport across the country. The image above shows a member of An Garda Síochána enforcing the new regulations.

And yet, despite the measure being placed on our citizens, the government are still allowing hundreds of people into the country from the United States each day, at a time when it has seen as many as 66,000 new confirmed cases of COVID-19 per day last week.

Speaking after a Cabinet meeting on Monday, Minister for Foreign Affairs Simon Coveney said that between 200 and 250 people are arriving in Ireland from the United States a day, though many of those are not tourists, but Irish people travelling home.

But Coveney also said that there are now 4,500 people in total arriving into the state each day.

And while tourists arriving in the country are required to fill out a locator form, and quarantine for 14 days on arrival, there has been widespread frustration that Ireland remains the only country in the EU which has not banned flights from the United States.

The question that arises out of this, one that has been voiced by many members of the public, as well as elected officials in the Dail such as Labour Transport spokesperson Duncan Smith and Social Democrats co-leader Roisín Shorthall is whether the government should suspend travel from high risk countries like the United States or Brazil.

According to information from the Health Protection Surveillance Centre on Monday evening, there have been 165 new cases confirmed in Ireland in the past two weeks.

Of those, 12% have been travel related, many times higher than the overall number of cases related to travel abroad, which stands at 2.4% of all the confirmed COVID-19 cases in Ireland.

This shows that even as community transmission has fallen in Ireland, travel is accounting for a greater share of the new cases in the country, and poses a growing risk of keeping the virus alive, and exacerbating

America alone has 3.43 million CONFIRMED cases, meaning that almost 1% of its entire population have been infected by the virus.

Using this logic, if 200 Americans board a plane to Ireland with a 1% infection rate, are we welcoming 2 new cases per day into the country? And is it not more realistic that after a long-haul flight the infection rate would be in the double digits?

Irish users of Reddit have taken to /r/Ireland to express their outrage. 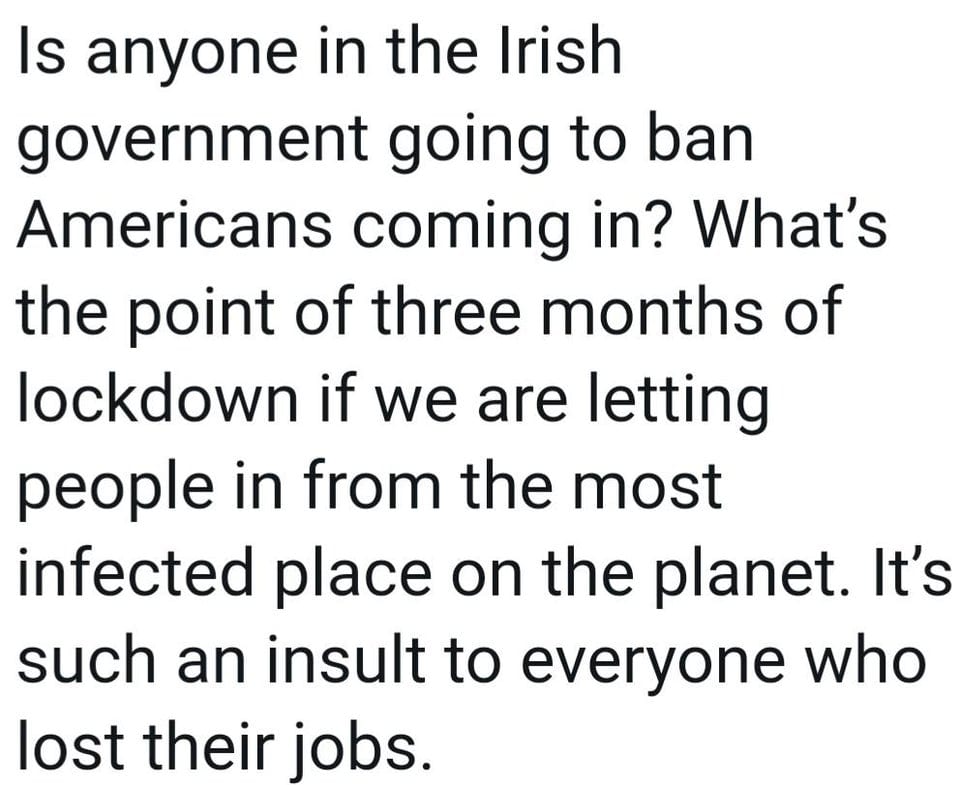 At this stage, I’m wondering why this is allowed to continue and how can we stop it?