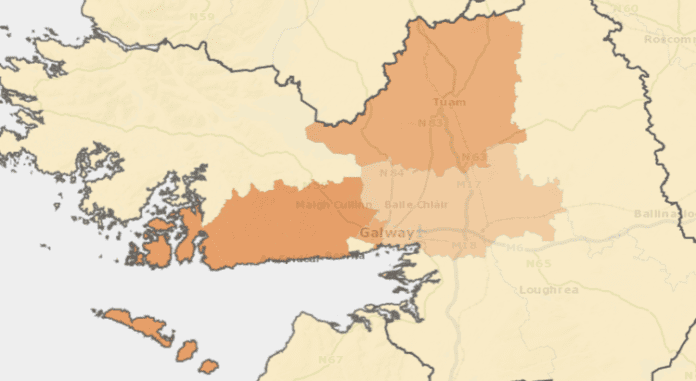 New figures released by the Department of Health today shows that just one local electoral area in Galway had a higher 14-day Covid incidence rate than national average in the first two weeks of September.

Twelve cases in total were confirmed in the Conamara South Electoral Area in from 1 to 14 September, from a population of 21,341.

Gort, Kinvara, Ballinasloe and Conamara North Local Electoral Areas all had less than 5 cases per 100,000.

Announcing the new data, which can be found in an interactive map HERE, Minister for Health Stephen Donnelly said: “I understand that people really want to know more detailed information about this virus, how it is affecting their communities, and those around the country as a whole.

“The COVID-19 Data Hub now offers regularly updated Local Electoral Area data in order to fulfil this very real desire that is out there for transparency around this virus and its impact.

“Transparency is a key cornerstone of Ireland’s response to this pandemic. At this crucial time, it matters more than ever.”

There have been 60 additional deaths related to COVID-19 reported by the Department of Health today, one of which occurred in December, and the...
Read more
COVID-19

There have been 50 further deaths related to COVID-19 reported by the Department of Health today, along with 187 cases in Galway.Nationwide there have...
Read more
COVID-19

COVID-19: Intensive Care Units at capacity in Galway as 141 hospitalised

There are no Intensive Care beds left open in Galway's hospitals with 13 COVID-19 patients in the ICU here as of Thursday night.The latest...
Read more
Facebook
Twitter
Pinterest
WhatsApp