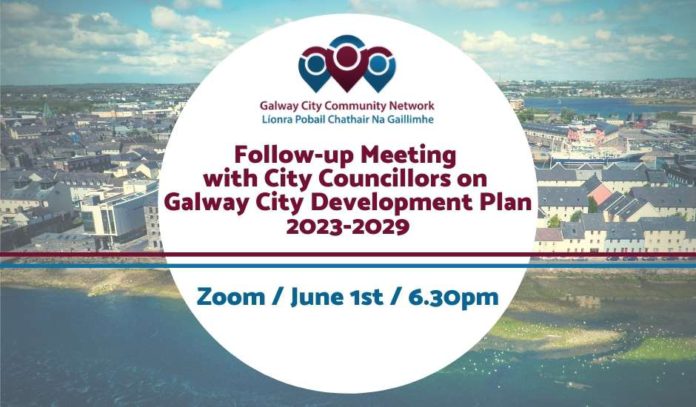 Councillors are being invited to take part in further collaborations with Galway City Community Network on crafting the next City Development Plan.

After what has been described as a very positive consultation process of creating the 2023 – 2019 City Development Plan earlier this year, GCCN will be following up with another remoted meeting on June 1.

GCCN organised 14 workshops in February during the initial public consultation to get the views of stakeholders on what the priorities should be in the future development of Galway City.

These were attended by over 400 people, including GCCN members, city councillors and a range of local groups.

Each workshop also included the attendance of members of the Galway City Planning Office to give an overview of the planning process.

A follow up meeting will now take place remotely on June 1, which will focus on the Chief Executive’s report and recommendations from the community, voluntary and environmental sectors GCCN represents.

This will be an opportunity for the Councillors to discuss the different recommendations included in the Chief Executive’s report with community, voluntary and environmental sectors, and hear their priorities.

Galway City Community Network (GCCN) is a network of 150 community, voluntary and environmental organisations active in Galway City, and maintains a link between these groups and the city council.

Ann Irwin, GCCN Co-ordinator, said “This early stage of the Development Plan Process is an important one, given that the foundation of the Draft Galway City Development Plan 2023-2029 is set on the initial submissions, the Chief Executive’s recommendations and the directives received from the Elected Members.

“GCCN intends to facilitate further collaborative discussions to ensure that the voice of the community is heard by the decision-makers at all the critical points of the process.”