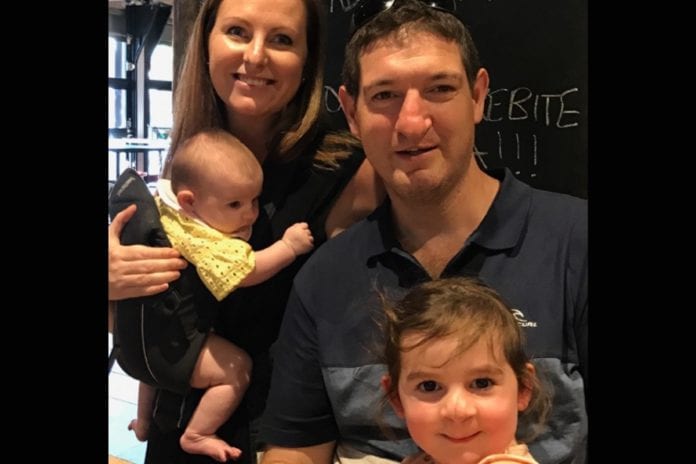 A GoFundMe page has been set up in aid of Tommy Kelly who suffered second degree burns while attending a bonfire last month.

Tommy Kelly of Rosscahill, Co. Galway moved back home from Australia at the end of 2017, with his partner Claire Flatley and their two small girls, Evie 3 yrs and Lauren just 1 year old.

Since then, Tommy’s focus has been to build a house and prepare for the arrival of their 3rd child, due in October’18.

Unfortunately, while attending a bonfire on June 23rd, there was a sudden explosion which resulted in Tommy getting second degree burns on over 50% of his body.

Tommy has been in St.James Hospital, Dublin since then, and Claire has also been supporting him while also trying to take care of the two girls.

Tommy, is now slowly on the mend, however he still remains hospitalised with a long road to recovery ahead of him, involving many medical treatments for burns treatments, physiotherapy etc.

As he is unable to work for the forseeable future due to the nature of his injuries, many people have expressed an interest in supporting him and Claire financially at this time.

Stephen Kelly, first cousin of Tommy set up the GoFundMe page and has said: “The GoFundMe page is not yet open 24 hours and we are delighted with the response from Tommy’s wide circle of support both here at home and from Melbourne Australia.

“There will be some local fundraisers organised, however, we would like to invite people to make donations online via this GoFundMe page.

“All funds received will go directly to Tommy and his family – every little helps, and will be greatly appreciated by Tommy and Claire.”

For anyone who would like to donate to the GoFundMe page you can do so at this link here.