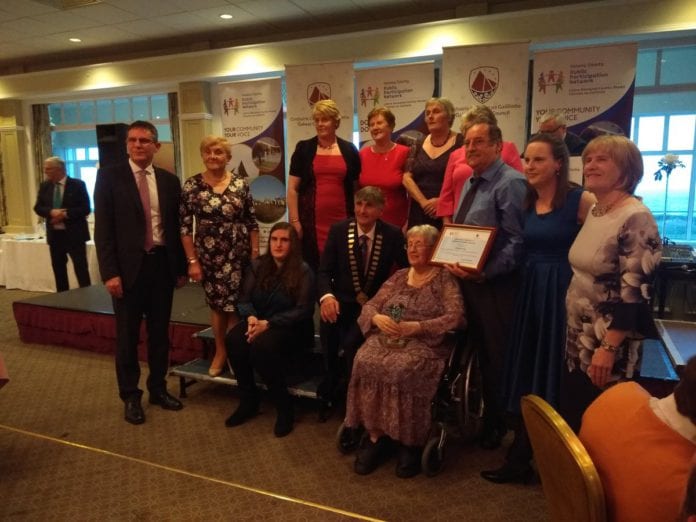 Rosemary Hanley from Maan was named the Volunteer of the Year in Galway county at the Cathaoirleach’s Community Awards this week.

Over 230 people from Community and volunteer groups from all over the county gathered at the Connemara Coast Hotel in Furbo this week for the awards recognising the good they have contributed to the community.

More than 140 nominations were received for the nine different categories of Awards presented on the night from a wide spectrum of volunteering activity.

The awards were organised by Galway County Public Participation Unit in partnership with the county council and presented by retiring Cathaoirleach Councillor Seán O Tuairisg, who is leaving the Council after 15 years representing Connemara.

Winner of Volunteer of the Year Award, Rosemary Hanley, is a legend in her local community of Maam and the surrounding villages of Joyce Country, for her longstanding dedication to volunteerism and community work.

For over 25 years she has worked with the Maam Women’s Group where as Chairperson she has worked hard with the group’s committee in providing courses, classes and activities for the local women and has helped fundraise for numerous charities over the years.

Rosemary was instrumental in setting up the Maam’s Children’s playscheme and played a major part in making the film ‘Mná an Mháma’ with Galway Film Centre.

Throughout the years she has worked to unite her local community on matters of education, social issues, and much more that has helped to enhance the lives of people living in Connemara.

“Volunteering is at the heart of community life,” said Chief Executive of Galway County Council, Kevin Kelly, adding that “Helping others and giving time to your community is a big commitment but a very rewarding one”.

The Community Facilities Award, was won by Domestic Violence Response. Based in Oughterard this group provides a vital service to vulnerable individuals, mostly women and children, experiencing domestic violence or abuse.

The Environment Award was won by Abbey Community Development Association, established in the 70s to help maintain and improve the infrastructure of their village.

In the years since then the group has worked on the establishment of a community apiary, a Pallet for Pollination Garden, the development of a school and community garden and even a Community Hen House referred to as ‘Peckers Park’.

The Fit 4 Life group in Woodford took home the Sports award on Thursday for in creating alternatives to field sports in the past four years.

Winner of the Arts & Culture Award was Yeats Thoor Ballylee Development CLG where people volunteer to organise exhibitions and performances by writers, artists and theatre groups in the old home of W.B Yeats.

Recently, the group opened Yeat’s ‘garage’ as the newly refurbished ‘Studio at Thoor Ballylee’ which offers workshop space for Arts and Cultural activities.

Moycullen Heritage / Cumann Staire Ruaidhrí Ó Flaitheartaigh won the Heritage Publication Award, for their book Ruaidhrí’s Story – How Moycullen got its name’ and Fochoiste Dhumhnach na Leanbh was a deserving winner of the award for Best Contribution to Heritage for working to re-establish the old Children’s burial ground called “Dumhnach na Leanbh” which dates back to the years of the famine.

Club na bhFoghlaimeoirí Gaeilge was the winner out of the groups which promote and increase use of the Irish language in either the Gaeltacht or non-Gaeltacht areas of the county.

And lastly the Might Oaks Arch Club in Portumna  took home the Social Inclusion Award for supporting families with special needs in experiencing activities they might otherwise never have got the chance to try.

Speaking about the volunteer work he has witnessed in his time as Cathaoirleach Seán Ó Tuairisg said that he was “truly humbled by the dedication, hard work and determination that communities and individuals are involved in every day”.