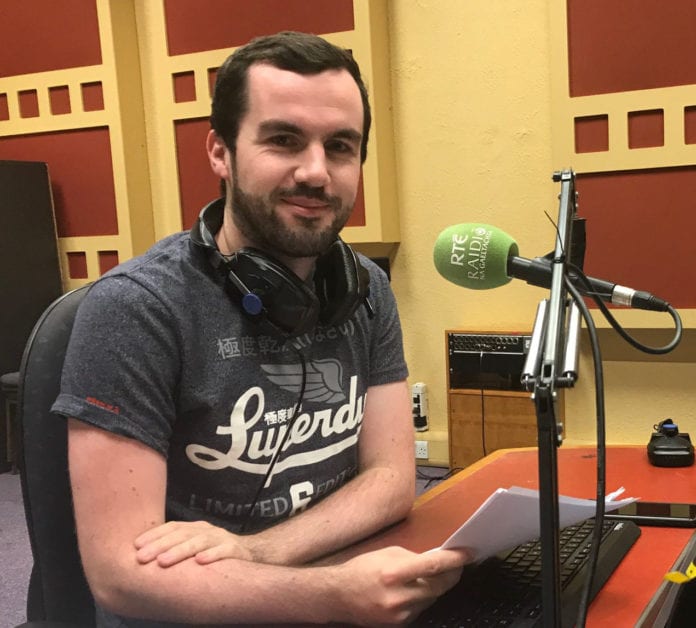 A young RTÉ RnaG Connemara presenter has been shortlisted for the Oireachtas Rising Star of the Year 2019 award, Réalta Óg na Bliana.

He has worked in many areas of the organisation, and currently works in the newsroom.

Previous to that, he presented the main western magazine programme Iris Aniar for the 2018/2019 season.  He has also indulged his passion for music on different music shows on RnaG, including the series Gleann an Cheoil he presented last year.

As well as his radio work, Séamus is familiar to TV viewers from his work with TG4.

He has been involved with the country music show Glór Tíre there for many years, and has been fronting the show, together with Aoife Ní Thuairisg, for the past two years.

He also presented the children’s book show Léirmheas Leabhar on the station, and his voice will be recognisable to many young viewers as characters from various cartoons.

“I’m very lucky to be able to work in my native language, in my native place, and it’s an honour in itself to get the nomination for this prize,” he said.

“I’ve grown up listening to people who are now my colleagues and friends in RnaG, and I’m grateful to them for all the advice and practical help they have given me since I started with Raidió na Gaeltachta.”

As well as country music, Séamus also has a grá for traditional music.  He comes from a family steeped in the sean-nós tradition, and his grandfather Máirtín Pheaits Ó Cualáin, was a legendary singer.

Séamus is very interested in amateur drama too, and is a member of Cumann Drámaíochta Chois Fharraige.  He travelled to the US with them last year where they performed Martin McDonagh’s Cripil Inis Meáin.

The winner of the Réalta Óg award is decided by public vote, and listeners can vote for Séamus Ó Scanláin by texting GRADAM3 to 51500.  Lines close at midday on Tuesday 29 October.

The winners will be announced at the Oireachtas festival in Citywest Hotel in Dublin on Wednesday 30 October.

The Oireachtas Media Awards are the national awards for Irish-language media.