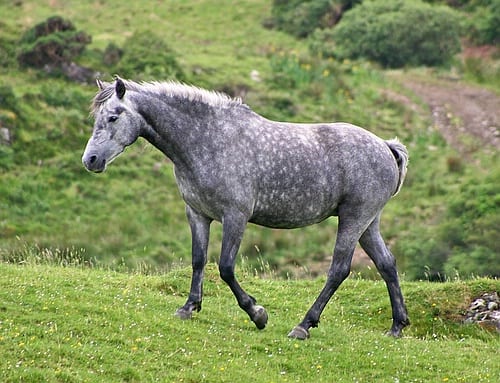 A Connemara Pony had been exchanged with a conservation farm in the north as part of increased North-South collaboration to protect rare breeds.

In exchange they gave the Irish Moiled Heifer Silverwood Sunflower lll (the third), another rare breed, to the Galway park.

William Cormacan, NPWS Regional Manager, Western Division said “we are delighted to participate in this cross border initiative and look forward to future collaboration on the  conservation of rare breeds.”

“Together we can raise awareness of the cultural and agricultural heritage of these rare breeds, the importance of preserving them and their importance in the management and conservation of our habitats.”

Tannaghmore Farm is the only Rare Breed Survival Trust approved farm in Ireland, and is playing an important role in the conservation of a number of breeds native to the British Isles which are in need of protection, including Irish Moiled cattle.

Significant expertise has been acquired in managing for certain species and habitat types, including in the control of certain invasive species.  Tannaghmore Farm will now display the iconic Connemara Pony to the public and commence a breeding programme.

Connemara National Park has played an important role in the breeding of the Connemara Pony, of which the park currently has six, since the late President of Ireland, Erskine Childers, presented a herd to the State.

It has also developed a small herd of Irish Moiled cattle with a view to using this rare Irish breed for conservation grazing within the National Park.

In addition to these rare breeds, the Park has Shetland Sheep, Highland cattle, Galway sheep and Tamworth pigs. The new addition today will significantly contribute to the breeding programmes already established there.

Connemara National Park and Tannaghmore Rare Breed Animal Farm will continue to work together on the conservation of traditional rare breeds and share knowledge and experiences regarding conservation grazing using heritage breeds.