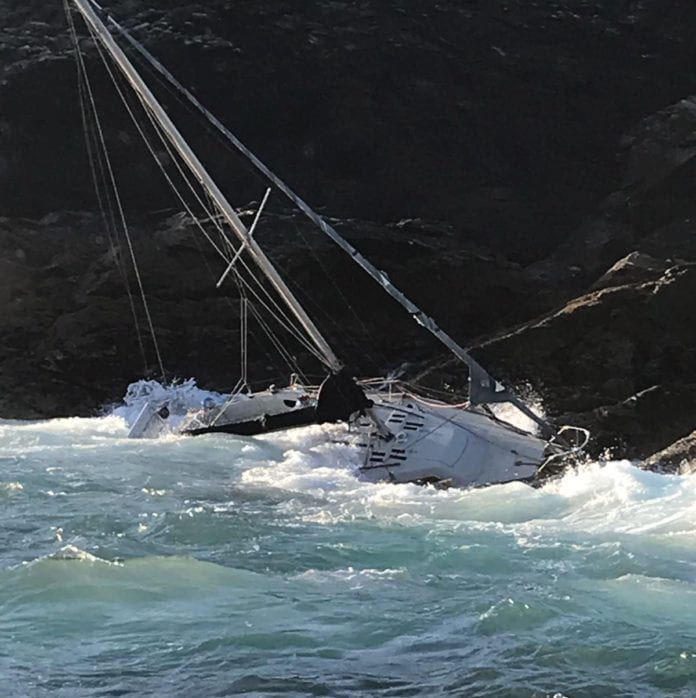 Four volunteer crew members from the Clifden RNLI station have received letters of commendation for their role in the rescue of a sailor stranded on the rocks at Inishark back in 2019.

Clifden RNLI volunteers Alvin Bell, his father Andy Bell, Ian Shanahan and Alan Pryce were on call on September 20, 2019, when a sailor became stranded on the rocks at Inishark in gale force winds.

The sailor had gotten into trouble when his yacht suffered engine failure and ended up being dashed against the rocks of the island’s shore. But he managed to make his way off the boat, and onto the precarious ‘safety’ of the exposed rocks.

Both of Clifden RNLI’s all-weather Shannon class and inshore Atlantic 85 lifeboats were launched at the request of the Irish Coast Guard, and made their way to the scene within 30 minutes.

The operation was hampered by a south east Force 7/8 onshore wind but Helm Alan Pryce, using experience and training, was able to safely put a crew member ashore.

The Shannon Class lifeboat was able to provide some shelter from the wind while Ian Shanahan went ashore to assess the casualty.

The man had sustained some minor injuries and, given the severity of the weather, it was decided that the safest decision was to call in the Coast Guard helicopter.

Rescue 118 airlifted bother men to safety, and the injured sailor was transferred to Castlebar General Hospital.

Father and son Bells, Ian Shanahan, and Alan Pryce recently received letters of commendation from John Payne, the RNLI Director of Lifesaving Operations, for their service.

John Brittain, Clifden RNLI Lifeboat Operations Manager congratulated the crew saying: “Alvin, Andy, Ian and Alan have shown continued commitment to Clifden RNLI and I am delighted that their selfless courage and dedication has been recognised with a letter of commendation.

“This particular rescue highlights the level of training, skills and seamanship of our volunteer members and we are very grateful for the role they play in saving lives at sea.”