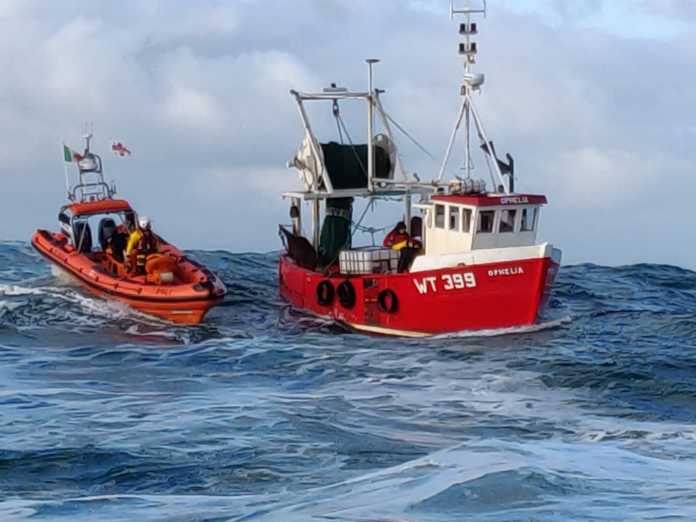 The Clifden RNLI lifeboats came to the aid of a sinking fishing trawler with two crew aboard on Saturday morning.

Both lifeboats at the Clifden RNLI station were called out just before 11am yesterday in response to a 10m fishing trawler in danger of sinking.

The trawler, with two crew members aboard, was on passage to Clare when it started taking on water.

All weather lifeboat coxswain James Mullen explained “When the lifeboats arrived on scene there was a large tanker vessel providing the casualty vessel with some shelter from the 7/8 meter seas.

“The Atlantic 85 helm Joe Acton immediately transferred two crew aboard with a salvage pump and began pumping out the vessel. Once the water level dropped low enough for the vessel to use their own engine power we headed back to shore.”

“However, on the way to Clifden the boat started to take on more water than the two pumps could handle and the engine overheated so we made the decision then to take her under tow.”

“The larger salvage pump was transferred from the Shannon class lifeboat to the casualty via the inshore lifeboat by crew member Chris Nee.”

ith both lifeboats pumps working and the vessels own bilge pump, the flow of water was stemmed and the boat was escorted safely back to Clifden. Both helicopters Rescue 115 and 118 were also on scene and we are glad to have been able to bring the casualties and the vessel safely back to shore’.

Clifden RNLI Deputy Launching Authority John Roberts said “The crew did extremely well today in a very large swell to carry out this rescue and without their assistance this vessel was in serious danger of sinking. Well done to all involved.”