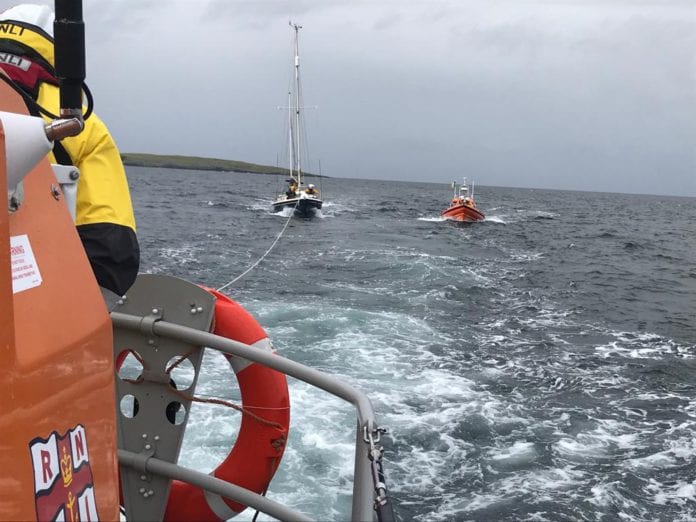 Two Clifden RNLI lifeboats came to the aid of a yacht in distress off Inishbofin amid deteriorating weather conditions this weekend.

The yacht had been on passage to Inishbofin when its dinghy broke free between Inishbofin island and the neighbouring small island of Davillaun.

One of the yacht’s three crew jumped aboard it but found that its engine would not start, and with the yacht having no motor power, the remaining two sailors were unable to retrieve their crew man.

The Clifden RNLI station was called out in response by the Malin Head Coast Gaurd to come to their aid.

On the way, the lifeboats received an update that another yacht had managed to get to the crew man’s aid and passed the dinghy back to the yacht.

However, when the Atlantic 85 arrived on the scene the dinghy broke free from the assisting yacht once again.

The lifeboat retrieved the dinghy while crew member Owen Hayes boarded the yacht.

As weather conditions were force 5 to 6 but deteriorating and their VHF radio had gone dead, the yacht crew agreed to return to shore at Inishbofin.

When winds are expected to reach force 6 on the Beaufort Scale up to 10 nautical miles offshore, Met Eireann issues a small craft coastal weather warning.

Under coxswain James Mullen and crewed by David O Reilly, Ashling Sweeney, Thomas Davis, Ian Shanahan and Michael Carey, the all weather lifeboat took the yacht under tow into Inishbofin harbour, alongside the Atlantic 85 helmed by Joe Acton, with Kenneth Flaherty and Chris Nee also on crew.

In a very busy week of training and call outs, both Clifden RNLI lifeboats returned to station ready for next service by 10pm.

The RNLI is a marine charity that provides 24/7 volunteer search and rescue services along the coast and waterways of the UK and Ireland.

It operates more than  238 lifeboat stations and since being founded in 1824, its lifeboat crews and lifeguards have saved over 142,700 lives.