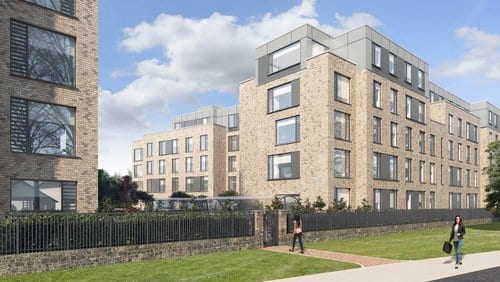 City Councillors expressed their dissatisfaction with plans for a 364 bed student accommodation project at the Westwood Hotel as being too large and with not enough parking.

At the July council meeting councillors said that plans for a five storey complex of student apartments would overshadow the Newcastle area, as well as cause illegal parking all over Newcastle and increase traffic on the Thomas Hynes road.

While the council acknowledged that there are large numbers of students in need of somewhere to live, the prevailing opinion was that accommodation should be built on campus rather than putting hundreds of students into a residential suburb.

The application, which will be submitted to An Bord Pleanála is for the demolition of the Westwood Hotel in Newcastle and the construction 63 student apartments with a total of 394 bed spaces.

Senior Executive Planner with the City Council Liam Blake presented a draft report by the Chief Executive on the application to gather the council’s opinions before making a submission to An Bord Pleanála.

It will also include a 150 sq. metre café/restaurant, a tv/cinema room, gaming pods, study areas, laundry facilities, a lounge, and a gym.

During the summer and a short period around Christmas, a total of 20 weeks in the year, the apartments will be available for tourists to rent out short term.

At 5 storeys high and with a total floor space of 11,876sq metre, the executive’s report says the current application is 30% larger than what the City Development Plan would allow on a site that size.

Councillor Ollie Crowe said that a development of that height and density would unreasonably overshadow residents of Tudor Lawn and Dangan Heights.

Multiple councillors also said that just including a café in the development would not offset the loss of the Westwood itself, which provides a valuable amenity for the area.

However councillor Mike Crowe said it wasn’t his place to comment on the economic viability of the Westwood, “Just because it might be suitable for various functions in the area, doesn’t mean it’s viable.”

There were also concerns about how the presence of so many students would affect the character of the residential suburb.

Councillor Terry O’Flaherty pointed out that students are a transient population, who don’t fully integrate into a neighbourhood.

Noise pollution in the neighbourhood was councillor Frank Fahy’s concern with the size of the project, asking: “How can you expect residents, many of whom are elderly, to deal with the noise of students coming home at three or four o’clock in the morning?”

The planning application states that there will be only 10 parking spaces at the complex, two of which will be disabled spots.

Initially, the developers proposed for there to be 35 spaces, but the city council transport services requested that they be reduced, and the number of bike spaces increased.

Under the proposed plan for the complex, students with a car, “must have access to a legal off street parking space,” or else they will not be allowed to stay.

“Are they only expecting to have two disabled residents?,” asked councillor Frank Fahy. Councillor Declan McDonnell pointed to a recent demonstration in Eyre square about the difficulties of finding disabled parking anywhere in the city.

Parking rules would be harder to enforce during the summer months when tourists are coming and going, Mr. Blake admitted, but during that period 14 temporary spaces on the basketball court would be added.

Councillor Donal Lyons noted that private houses are required to have one and a half car spaces in order to get planning approval under the City Development Plan, but the Westwood application only has ten spaces for nearly 400 people.

The application seeks to reassure that there is plentiful parking nearby, saying: “There is currently ample ‘pay and display’ parking open to the general public within 500m of the Residence.”

Councillor Billy Cameron expressed disbelief with that claim, noting that double yellow lines or other measures have been put in place at almost every estate in Newcastle to combat illegal parking, and this will only make it worse.

Councillor Fahy wondered if all of Newcastle would have to be converted into a parking meter zone, noting that would cause problems for permanent residents.

The application also says residents will be encouraged to make use of public transport. The development is sited next to the 404 bus route which is going to be made more regular under the Galway Transport Strategy.

Councillor Mark Lohan expressed his skepticism at the application relying on bus and cycling infrastructure, “That doesn’t even exist at the moment.”

Mr. Blake said the Executive’s report would recommend the project by reduced in size by approximately 30%, including removing the fifth floor altogether. This would bring it in line with the requirements of the City Development Plan.

However, since this development is over 200 beds the application can be submitted directly to An Bord Pleanála without requiring planning permission from the City Council first.

The council cannot make material alterations to the application, only submit recommendations. Similarly, this meeting was only to informally gather councillors’ views, which will be attached to the report.

Though the current application is 30% larger than the City Development Plan would allow, when asked by Councillor Conneely Mr. Blake said that An Bord Pleanála can ignore the CDP is it pleases.

Mr. Blake said that though there were concerns about how the development would affect the Newcastle area, it would ultimately free up traditional housing around the city by taking hundreds of students out of estates.

Councillors have until the end of the week to submit their concerns in writing to the planning department for inclusion in the Chief Executive’s submission to An Bord Pleanála.