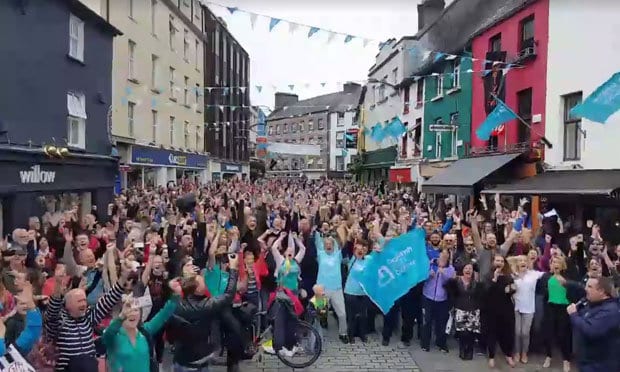 Galway City Council overwhelmingly gave its full backing to the leadership team of Galway 2020 on Tuesday evening, despite initial concerns about funding issues.

The city council called a special meeting to receive an update on the progress of delivering Galway 2020 at the June monthly meeting due to concerns about progress in raising funds and the departure of Creative Director Chris Baldwin.

Chairperson of Galway 2020 Aideen McGinley and Chief Executive Hannah Kiely said that despite some “bumps in the road” Galway is making good progress, with over 90% of projects outlined in our bid for City of Culture 2020 locked in.

52 projects throughout the city and county have been agreed on already out of more than 140 applications. 24 of those events will take place across the three wards of Galway city. Roughly 70% of the final programme will come from the bid book, with 30% open to further applications.

The main area of concern expressed by councillors was a lack of clarity and communication over how much money has been collected and spent by Galway 2020 so far, and how closely that matches up with the projections shown to the council.

The city council has committed €6 million of the €46 million budget for 2020. The EU has also promised to fund Galway 2020 to the tune of €3.2 million. CEO Kiely said that of the city council’s commitment, €3.8 million was still outstanding, while the majority of EU funding would be delivered in 2019 and 2020.

The important point , she said, was that this funding would continue to come in right up to 2021, rather than having to be in place by January 1, 2020: “The first event is 18 months out, but the last event is 30 months out.”

Fears about the readiness of Galway 2020 were dismissed as premature alarmism by councillor Noel Larkin, “I’m not sure what people are expecting,” he said, “Are they expecting to deliver 2020 in 2018?”

The management team promised to return to the council with updated budget figures as soon as they are available.

Councillor Padraig Conneelly was the harshest critic Chairperson McGinley and CEO Kiely at the meeting, asking pointed questions about the departure of Mr. Baldwin and the appointment of a Business Engagement Director.

“From what I’ve heard here today I’ve no confidence in the ability of the Chair and the Chief Executive to deliver,” Councillor Conneelly said, “You’re creating a crater for yourself in the road, not a bump.”

Chris Baldwin was appointed Creative Director of Galway 2020 last year, but departed in the last few weeks in what has been called a mutual decision. Chairperson McGinley said she would not be discussing internal employee matters for privacy reasons, but that an announcement will be made about his replacement in July.

Chief Executive of the city council Brendan McGrath dismissed any worries about Mr. Baldwin’s departure, telling councillors that the first Creative Director of every single European City of Culture has left before the project was completed.

Irish, and its place in Galway 2020, was also a topic of interest for several councillors, “It’s one of the jewels of out county that we have one of the big Gaeltachts,” said Councillor Cathal O’Conchúir, “that jewel needs to be exposed.”

Councillor Mairéad Farell backed councillor O’Conchúir saying there should be a Gaeilgeoir on the management team as Galway is a bilingual city and county, “It’s not just about speaking about it, but speaking in it.” she said.

Two similar motions were brought before the council for a vote. Councillor Noel Larkin proposed a motion saying the board of Galway 2020 had the full support of the city council, while councillor Flannery brought a similar motion specifying the the board and senior management had the council’s backing.

The only councillor who voted differently on the two motions was Mike Crowe. Councillor Crowe voted in favour of backing the board of Galway 2020, but declined to endorse the motion expressing confidence in the board and senior executives.