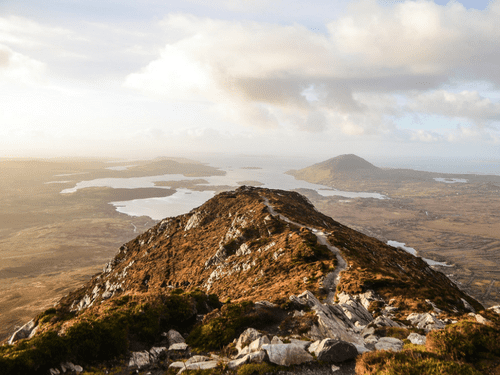 Family, GAA and the community spirit of Maigh Cuilinn will unite on a Memorial Walk up Diamond Hill this coming Sunday, June 24th.

A memorial walk has been organised in memory of the late James Devaney, a sufferer of Cystic Fybrosis, a husband, father of 2 boys, a lover of the GAA and a former coach of the Cumann Peile Maigh Cuilinn/Cumann Iománaíochta Maigh Cuilinn.

The memorial walk is being organised by the remaining coaches of the Cumann in memory of their fellow coach and friend James Devaney.

David O Reilly, both a fellow coach and friend of James spoke about where the idea of the memorial walk came from.

“James passed away in mid October. Some of us knew he was sick but he didn’t want to be defined by having Cystic Fibrosis (CF) so it wasn’t public knowledge.

“We didn’t want the year to go by and not have done something because then it’ll be pushed out to 18 months and then it’s 2 years and then people tend to forget about things so that’s the reason behind Diamond Hill.

David emphasised the fact that the other four or five coaching members of Cumann Peile Maigh Cuilinn/Cumann Iománaíochta Maigh Cuilinn had spoken about doing something in James’ memory and ensuring it was ok with his family was their top priority.

“We discussed it with Shayna, his wife and she’s fully on board with it. There’s four or five of us driving it really if you know what I mean. We discussed things we wanted to do and how we could remember him best.

“This seemed to be the one that ticked all the boxes in the sense that families could get involved because a young person or an old person can climb Diamond Hill.

“The idea is that we all gather there at roughly 12 o’ clock/12.30 and let people set off on their own pace. If someone takes an hour and a half to get to the top – great. If they take two hours, if they take an hour, it doesn’t matter. It’s just let’s all try and get up there and if we have a load up there at one stage all the better.

“It’s not a race so people should take walking breaks or water breaks, just sit down and take a break. We will have bits and pieces from the football club to raffle off for the kids that are there and we might do an egg/spoon race.

“It’s not trying to raise a big load of money for CF, if we will that’s a bonus on top of what we’re doing basically but the more awareness we can get in James’ memory is what is driving this.

“We didn’t really envisage it was going to be a big fundraiser as such but more of a family day out, a memorial and that.

“All funds will go to CF – there are sponsorship cards and people donating money as well so there should be a decent amount gathered but that wasn’t the idea behind it. It was more to remember him.”

James was a loving husband and a father of two young boys, Michael 10 and Jack 6. He was a family man, a GAA man and a man of the community. He worked with the CF Foundation in NUIG where he was doing a lot of research on CF.

David recounts the joy James felt when a new drug was brought out a couple of years ago.

“There’s another kid in the village, she’s 11/12 and a sufferer of CF. He rang her parents straight away and said her future is going to be better. He wasn’t looking at it from a selfish point of view. He was delighted, he was very much part of the research crew.”

Sunday’s memorial walk is a chance for the community to unite in his memory, to remember the good times he had within the community and to help his remaining family. His wife Shayna, two kids, Michael and Jack, his brother Richard, sister Helen, and his in-laws will all partake in the walk.

“It’s more of a family day out with a picnic down at the bottom, some people will come out and they won’t walk because they just want to be involved.”

David urges the Maigh Cuilinn community to come together and partake in this family event in memory of a strong family figure within the community. Even if you don’t fancy climbing Diamond Hill there will be plenty of craic in Connemara National Park on the day. The James Devaney Memorial Walk takes place this coming Sunday, June 24th.