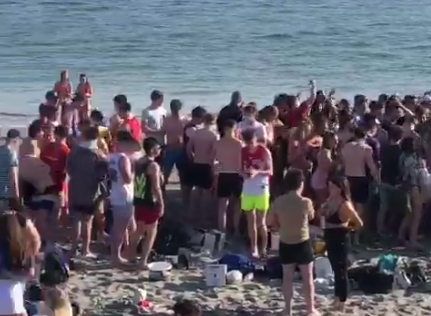 The misery of the never-ending lockdown was replaced by a party atmosphere under Salthill’s blue skies this afternoon as hundreds of people flocked to the beaches and prom to drink and enjoy the beautiful weather.

Many people ditched social distancing to dance and sing together on the beaches at Salthill, while dozens more enjoyed the sunshine at the Spanish Arch, albeit slightly more socially distanced.

Commenting this evening, Michelin starred chef and restaurateur JP McMahon said that the Government needs to reassess their opening strategy in light of today’s scenes – as pubs and restaurants are regulated spaces.

Another social media user said that he understands why people are angry at the scenes, but argued that those criticising people in Salthill today should ‘stop attacking an entire generation’.

“Our young people have generally played a blinder during this pandemic and have have sacrificed a way more important part of their lives than many of the people giving out online,” he said.