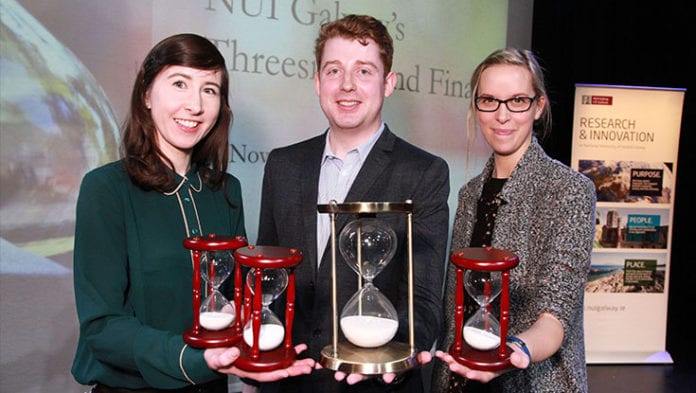 A quick explanation on how to locate brain tumours using ultrasound was the winner by PhD student James Blackwell was the winner of the 2018 Threesis competition at NUI Galway.

Threesis is a fast paced competition where researchers try to explain their story in three minutes, using just three slides, for a panel of three judges in plain language.

These can be used by surgeons to locate brain tumours or other diseases that may be afflicting the brain.

Second Place went to Katie Gilligan from Eyrecourt for her talk ‘A novel therapy for breast cancer patients’.

Katie’s research at the School of Medicine involves a novel therapy for breast cancer that aims to make treatments more targeted and tolerable for the patient.

It’s hoped this will lead to improved quality of life for the person battling cancer.

Third place from the judges, and also the Audience Winner, went to Siobhán Morrissey with her talk on ‘Enid Blyton: War and Nationalism’.

Siobhán is a student of literature who explored the colonial, imperial and nationalistic elements in the work of the famous children’s author.

Not only are Threesis participants pressed to explain their topic in a short space of time, but they have to keep the talk jargon-free.

Ruth Hynes of the Research Office at NUI Galway which organised the event said, “We had incredible interest in Threesis this semester.”

“Through a series of training workshops in October, and six heats in November we whittled down the initial 80 people who registered to our 12 amazing finalists.”

“James, Katie and Siobhán did a fantastic job on the night, as did all of the other finalists and the many other researchers who signed up to be part of Threesis 2018 to communicate their research,” she concluded.

This was the seventh Threesis competition at NUI Galway which began in 2012, which is open to research students of all levels enrolled at the university.