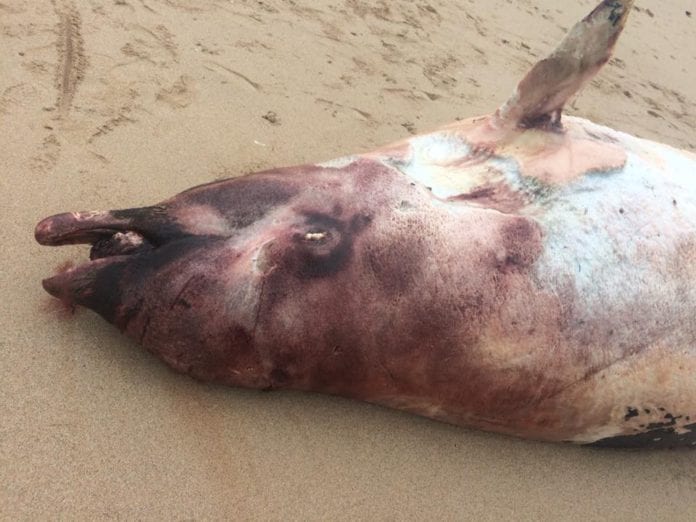 A Cuvier’s beaked whale found dead on Omey Island is one of five reported along the West Coast in a week, something the Irish Whale and Dolphin Group says is a serious concern.

The Cuiver’s beaked whale was found on Omey Island off the coast of Connemara last week on August 3.

Three more whales found dead were all discovered the next day in Mayo and Donegal.

One was found in Sheephaven Bay and one on Gola Island, Co. Donegal, while the other was reported at Tirraun on the Mullet Peninsula in Mayo.

All three animals had likely been dead for several days when they were found going on the condition they were in according to the IWDG.

The similarity of their conditions also suggests that the three whales died around the same time, the IWDG said.

The final stranded whale was reported from Cliffony in Co. Sligo on Tuesday, August 7.

The group stresses that the five dead whales reported so far are a, “minimum number, as other dead carcasses may not was ashore or may go unreported for other reasons.”

The IWDG found it deeply concerning that five beached whales were reported in such a short space of time.

“It would be relatively normal to record three or four strandings of this species in Ireland in any one year but it is highly unusual to have three recorded in separate locations on the one day.”

Images of the whale found on Gola Island were shared by the IWDG on their facebook page.

Cuvier’s beaked whales are a deep diving species and have been known to be forced to the surface by loud, sub-aquatic, man-made noises like sonar.

A member another deep diving whale species, a long-finned pilot whale, was also found dead on Cross Beach in Co. Mayo recently, close to where the Cuvier’s beaked whale was found.

The IWDG has recorded a total of 78 beached beaked whales since it began keeping count.