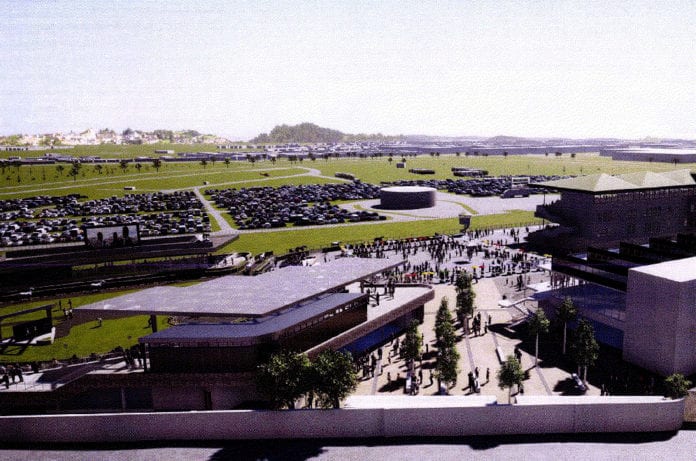 Planning approval has been granted for a massive overhaul of Galway Racecourse in Ballybrit.

The Galway Race Committee has received planning permission for the development of three parcels of land at the eastern end of the racecourse with significant demolition and construction work.

The project will involve the demolition of a toilet block, saddling stalls, turnstiles canopy and the closure of entrance ‘A’.

It will also involve the construction of a new parade ring with a winners enclosure and podium.

A new hospitality and amenities building with spectator viewing and an external courtyard will be built at the north parade ring.

While at the south parade ring it is intended to build a hospitality restaurant building with a roof mounted external screen.

The new west parade ring will have a double sided spectator viewing terrace and additional unsaddling and wash down areas and horse walk routes are also to be developed.

The final new construction included in the plans is a pre-parade ring with 18 saddling boxes and a spectator viewing terrace.

Modifications will be made to the existing weigh room/office building to provide improved participants facilities, reception space, and stewards rooms.

Refurbishments are also planned for the main Millennium Grandstand at Galway Racecourse and the extension with a new glazing line to provide a hospitality area for owners, trainers, and members.

The racecourse offices, associated car parking, and electric vehicle charging points will be relocated to accommodate this project.

A Design Report prepared for this application stated that “The Eastern End Redevelopment Project aspires to raise the quality level and spectator experience at Galway Races through the shaping of strategic elements”.

The report said that by “providing a range of new facilities and spectacular new view amphitheater to create a special atmosphere” it could deliver an appropriate setting for the Galway Races in the 21st century.

There were no public submissions made to the city council concerning the redevelopment of the racecourse and planning permission was granted with a total of 10 conditions attached.