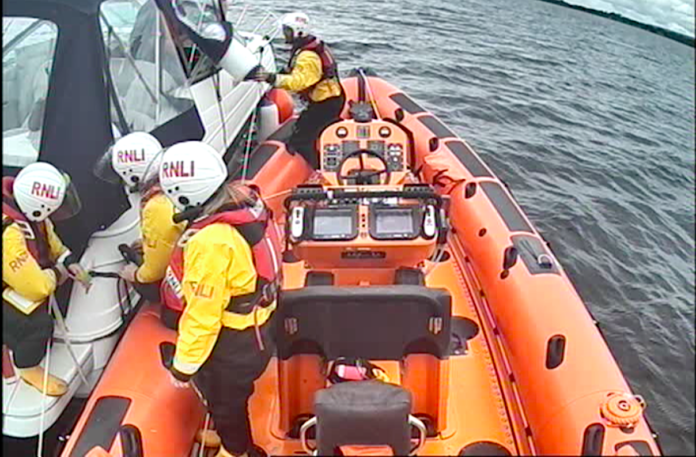 It was a busy weekend for the Lough Derg RNLI lifeboat, as they had two back to back call outs to boats in trouble on Sunday.

The double call outs saw the lifeboat crew come to the aid of seven people in a cruiser drifting without steering, and a speedboat taking on water.

The RNLI crew set off at 2:30pm on Sunday, after being called out by the Coast Guard in response to a 25ft motor cruiser with three people aboard, adrift with steering failure near Williamstown.

At 2.35pm the lifeboat arrived on scene. The lifeboat transferred a volunteer across to the casualty vessel who established that all onboard were safe and unharmed and wearing their lifejackets.

The cruiser had power, but its steering had failed, and the lifeboat crew decided to tow the boat to the harbour at Dromineer due to the Force 4 winds.

Around 20 minutes later, as they were securing the stricken boat at the harbour, a second call came in about a speedboat taking on water.

The speedboat met up with the lifeboat crew, who provided assistance in pumping the water from the boat.

Two passengers in the speedboat decided to go ashore at Dromineer, while the skipper and a crew member decided to head back to their home harbour despite the leak.

Jeremy Freeman, Deputy Launching Authority at Lough Derg RNLI, advises boat users to, “ensure your vessel is serviced and in safe working order and if you find yourself in difficulty on the lake dial 999 or 112 and ask for marine rescue.”