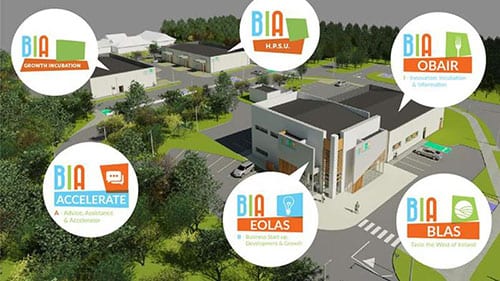 Construction work is ready to move ahead on the multi-million euro Athenry BIA Innovator campus with the signing of a lease for the land.

The BIA Innovator campus in Athenry will encourage entrepreneurship and cutting edge research in the food industry to support the growth of business in the west of Ireland.

It will be run by Teagasc with partnerships including Galway County Council, Athenry Community Council, the GRETB, Western Development Commission and SCCUL.

The project was awarded €3.5 million from the Rural Regeneration and Development Fund earlier this year which was also used for upgrades to the public realm in Athenry town centre.

Galway East TD Seán Canney said that he has received confirmation of the lease signing from Minister for Agriculture Michael Creed which should allow Tegasc to proceed with the project.

“This is great news and is part of the master plan for Athenry to realise its potential as a major food and tourism centre,” Seán Canney said.

“I expect construction of the BIA Innovator hub to move ahead now that all outstanding issues for the project have been resolved.”

According to Deputy Canney the BIA Innovator campus is expected to create 360 new jobs in 40 companies during its first three years of existence, along with 2,400 training places.

When completed the campus will cover 24,000sq ft of space for start ups, expanding businesses, and research in the food industry.

There will be four key components to support food enterprises on the campus: