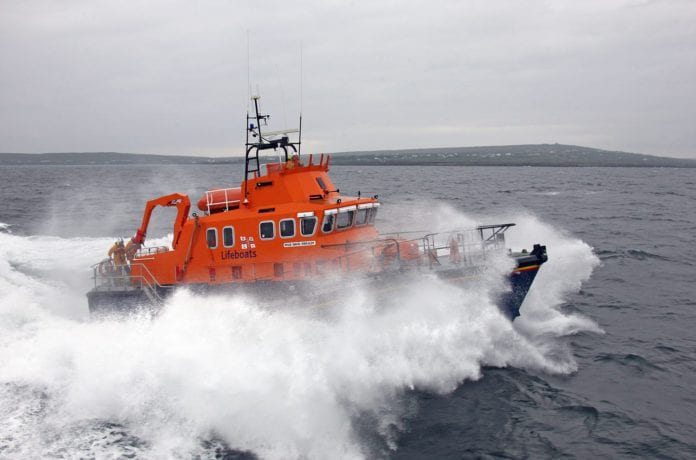 The Aran Islands RNLI lifeboat carried out a medical evacuation from Inis Meain today as the seas began to turn in the early stages of Storm Lorenzo.

The volunteer lifeboat crew were called out at 9:51am today by the Coast Guard after a woman on Inis Meain sustained an injury in a fall and needed hospitalisation.

The lifeboat launched from its station at Kilronan on Inis Mór and made its way directly to Inis Meain under Coxswain John O’Donnell.

Weather conditions at the time of launching were described as having rough seas with a 3.5m swell rising, and a south easterly force 8 wind blowing.

“The conditions at sea this morning were really challenging but despite Storm Lorenzo, our willing and able volunteer crew members selflessly didn’t hesitate to answer the call and ensure the patient was looked after until she was safely transferred to the ambulance in Rossaveal,”  John O’Donnell said.

“As Storm Lorenzo continues, we would remind everybody to take note of the weather forecast and Stay Back – Stay Dry – Stay High,” Mr O’Donnell added.

“If you see someone in difficulty or are concerned about somebody’s whereabouts on or near the water use VHF channel 16 or dial 112, and ask for the Coast Guard.”