Vacant Salthill house to be knocked and replaced with 39 apartments 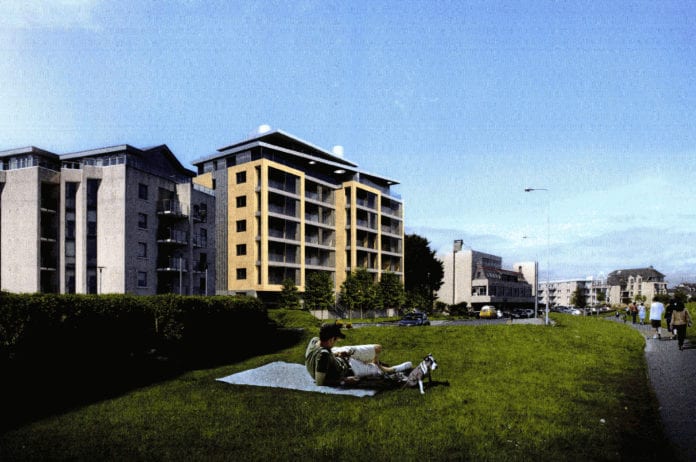 Planning approval has been granted to knock down a vacant house in Salthill and replace it with blocks of apartments.

Catena Property Ltd has received planning permission to demolish a bungalow at 105 Salthill Road Upper and build 38 apartments with balconies on the site.

The design also includes a ground floor courtyard with sculpture and a play area, and a rainwater harvesting system.

Both blocks would also have roof gardens and patios at the penthouse level.

According to the developer this is one of the few sites in the area that has gone undeveloped with an “old single storey dwelling on an exceptionally large site”.

The central courtyard will include a play area for children aged 0-6, picnic tables, bench seating and a lawn area.

One submission was made to the city council concerning this development from a local resident concerned that the larger building would overshadow its neighbours.

The objection also said that the plot density on the for the apartments was beyond what’s permitted by the city development plan.

Further Information was submitted to the city council by the developer on April 30 that amended the design of the development in an attempt to address concerns raised.

Block A was originally going to be eight storeys at its highest point, but a community room was removed to reduce its overall height and bulk.

However the objectors said that the only acceptable redesign would be to reduce the overall height of Block A to five storeys.

The council also requested that the developer submit a Traffic Management Plan which was created by by Tobin Consulting Engineers.

Parking at the new apartment complex will be achieved through 31 parking spaces in a basement car park and 30 bicycle stand spaces.