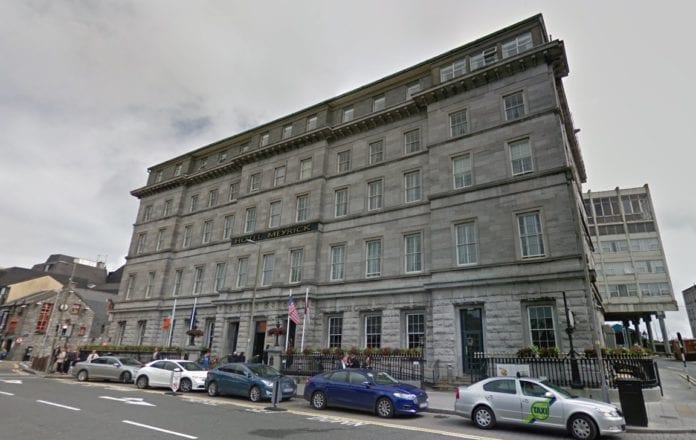 Approval has been given for a significant expansion of the former Meyrick Hotel after the developer appealed an earlier decision to An Bord Pleanála.

Mt Mono Trading proposed renovations and an extension to the former Meyrick Hotel, now known as the Hardiman, to increase the number of guest bedrooms and improve fire safety.

The smaller element of the project will involve re configuring the ground floor and 4th floor layout to include new fire escape corridors.

But more work would have been done on the modern 20th century extension to the rear of the hotel.

The developer intends to remove the existing swimming pool on the 5th floor in order to make room for 13 bedrooms, and build and entirely new 6th floor which will have six bedrooms.

In a split decision, Galway City Council granted approval for the ground floor amendment and alterations to the fourth floor.

However it refused permission for the conversion of the leisure centre to bedrooms, or the construction of a 6th floor.

In refusing to allow the extension the council said that doing so would extend the life of a modern extension to the hotel which is “entirely unsympathetic to the original building” of the hotel.

The 19th century Meyrick Hotel is a protected structure, and it sits within the Architectural Conservation Area of Ere Square.

In appealing that decision to An Bord Pleanála, Mt Mono argued that the modern extension to the Meyrick is a unique building, with architectural merit in its own right.

The developer also said that regardless of whether or not this expansion is approved, the extension will continue to operate as part of the hotel.

But this project will see this extension upgraded to have a more positive aesthetic appearance.

The inspector for An Bord Pleanála noted that this concrete framed construction has not been properly maintained, and is now a “visually neglected and dilapidated structure” that is visible from many approaches in Eyre Square.

It’s proposed that this structure will also get a facelift on the outside, with repairs to the concrete facade and new aluminium framed windows.

It was added that the extension is “removed from the original 19th century hotel and the design reflects a distinct period of mid-20th century ‘brutalist’ architecture”.

That makes it easily distinguishable from the original building, and changes to it would have a minimal impact on the character of the 19th century hotel.

The inspector therefore said that the proposed extension “would not seriously seriously injure the visual amenities of the area and would not adversely impact on the character of the Protected Structure or the Architectural Conservation Area”.

An Bord Pleanála granted planning permission for the entire development at the hotel with a total of eight conditions attached.