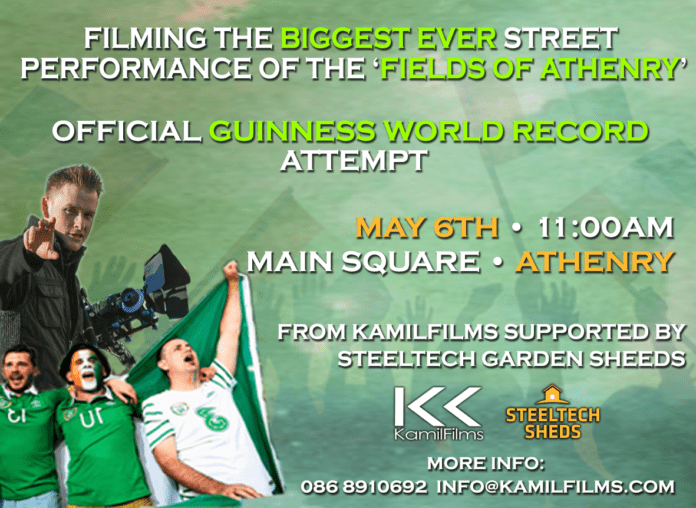 Plans are underway to create a spectacular video of a massive street performance of the Fields of Athenry.

Kamil Films, who created the viral video of 15,000 people singing Galway Girl in 2016, are planning to recreate this in Athenry on 6 May with arguably the nation’s favourite song.

Over the years, the song has become a cultural and sporting anthem, being sung by thousands of  passionate Irish rugby and football supporters at matches in Dublin and abroad, as well by Celtic fans in the terraces at Parkhead.

Guests including Amazing Apples, Matt Cunningham and Galway Rose Deirdre O’Sullivan are confirmed for the day.

To add to the spectacle, the world’s largest tin whistle ensemble is also organised for the day.

The project has received great support from sports clubs and schools, and people from across Galway are invited to join in the fun and express their connection to this song in their own way.

During the latest Covid-19 restrictions, Galway Rural Development (GRD) and its army of SICAP, Tús, RSS and CE staff have turned their focus to...
Read more
Facebook
Twitter
Pinterest
WhatsApp

How to land a job during COVID-19

With Level 5 set to last for around five more weeks and uncertainty about what restrictions will be in place in the coming months,...
Read more
Load more