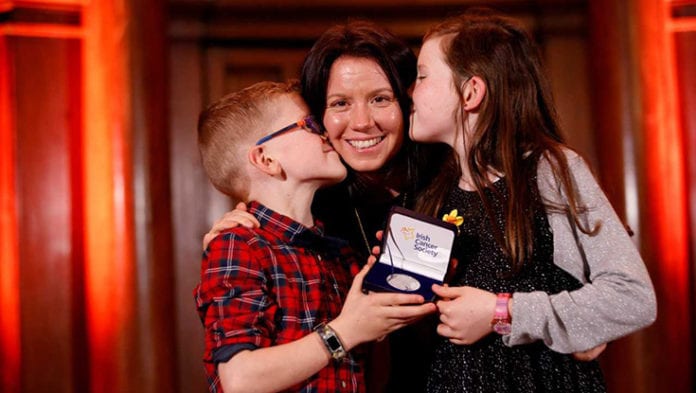 The cancer society awards recognised some of the vital work being undertaken by researchers and support staff throughout the country in improving cancer care.

Kiltormer native Aideen won the top prize of Research Paper of the Year for her work on immunotherapy treatments.

Currently a lecturer in Tumour Immunology in the School of Medicine at NUI Galway, Aideen received funding for her research into bowel cancer in 2013.

She has been focusing on trying new ways to tackle the disease through immunotherapy treatments to the body’s natural defences.

“Bowel cancer is the second biggest cause of cancer deaths in Ireland,”Aideen said “so I feel privileged that my Irish Cancer Society funding has given me the chance to explore new ways to treat this disease and save lives.”

The paper was written by a team of authors, led by PhD researcher Grace O’Malley of NUI Galway.

Aideen was one of six people who talked about their work to a packed audience at the awards ceremony in Dublin’s House of Lords.

It was also announced at the awards that thanks to the generosity of public donations, the Irish Cancer Society expects to have invested €30 million into research by 2020.

Averil Power, Chief Executive of the Irish Cancer Society said, “This decade has broken all records for cancer research in Ireland.”

“Thanks to the generosity of the public, the Irish Cancer Society has invested more money in life-saving research than ever before, finding better ways to prevent, detect and treat cancer.”

In 2019 the Cancer Society expects to invest €2.3 million in research involving 100 scientists around the country.