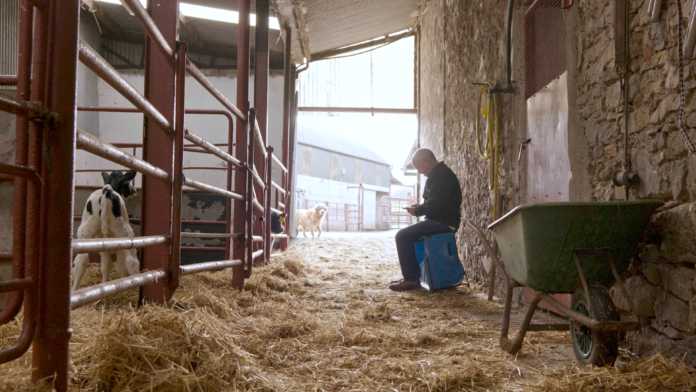 Marts are more than just places to sell animals, they’re the lifeline, the social connector and the place where people come together to chat, get the news and of course hopefully get a deal.

But of course, this year, due to COVID-19 marts have been faced with extremely challenging circumstances in complying with lockdown restrictions, as other businesses have.

A Galway based technology startup is helping marts move into remote business so farmers can easily buy and sell livestock at auction online.

MartEye was founded at the Portershed in Galway City just six months ago, and is already in use at over 40 marts around Ireland and the UK.

The platform allows farmers and traders to view and take part in auctions remotely. But more than just an app, it combines software with physical tech to keep some of the showmanship that is part and parcel of an auction.

At the centre of MartEye’s technology is a first of its kind Digital Gavel, carved from sustainable Irish ash and fitted with state-of-the-art electronics that sync the offline auction with the online.

Farmers can download the app for free, and marts pay a fixed monthly fee for the tech to make it all run, which includes a dashboard for the auctioneer to keep track of participants in real time.

“Our goal was to create a product that would be affordable, easy to use and could be set-up quickly,” explains MartEye co-founder Mark McGann, adding, “we consulted with Mart owners early on to establish their needs along with the needs of the sellers and buyers.”

They already have over 50k active users, and more than €150 million in livestock has been sold through MartEye in the past six months.

The platform has also helped to preserve some of the social element of coming to marts to trade, Mark says with users spending more time taking part than they strictly need to make sales.

“The average time people spend in an app is usually around 5 minutes and with MartEye it is five times that. People enjoy watching the trade even late into the night.”

With runaway success in such a short period, the team have decided to use their playform to give back, with marts around the country holding a simultaneous charity auction, MartAid, on November 5.

The money raised will be donated to Embrace FARM in support of the work they do in helping those affected by farm accidents. This event will be streamed globally on MartEye so farming communities throughout the whole of Ireland will be able to bid on hundreds of exciting products and experiences.

Embrace FARM is a farming organisation which was founded by Brian and Norma Rohan, a farming family from Shanahoe, County Laois in 2014. Brian with his wife Norma and extended family lost his father Liam Rohan to a sudden farm accident in 2013.

“The impact a farm tragedy leaves behind on the family is huge, the emotional loss is only one aspect, there is also a practical loss,” Norma explains.

“In the majority of cases it’s the farmer himself that is killed, the man that knows the running of the farm, probably has the bank account in his own name, that’s frozen, probably knows every little nook and cranny on his farm, where the wet sports are in fields, knows just how to tweak a bit of machinery to get it running smoothly, these are just a few little examples.”

MartAid will kick off at 6pm on November 5. To support MartAid check out marteye.ie/martaid  or get social across Facebook and Twitter and to find out more about Embrace Farm log onto the website embracefarm.com/.