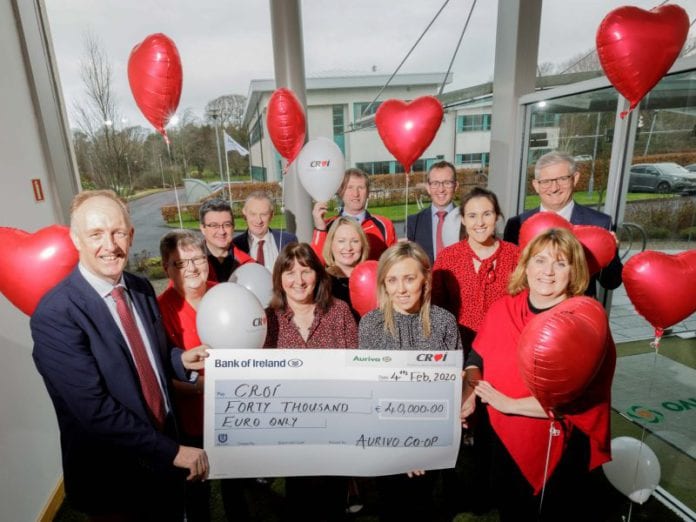 A cheque for €40,000 was recently presented to Croí by representatives of Aurivo, the result of their ‘Charity of the Year’ programme.

The money was raised by Aurivo employees who held a number of fundraising events throughout last year.

Commenting on the announcement, Donal Tierney, Aurivo’s CEO, said: “Aurivo is delighted to give back to the local community and support Croí and their work”.

He added that they take pride in the charity of the year programme as part of a drive towards social responsibility.

The funds raised by Aurivo staff and matched by the co-op will be used to refurbish Croí’s three self-contained apartments.

These are open 365 days a year and are used by people from all over Ireland to stay close to family members receiving hospital treatment.

“This generous support by Aurivo will allow Croí to continue to provide much-needed accommodation for people at a time when they need to be as close as possible to a loved one who is receiving cardiac or stroke care in Galway University Hospital,” said Croí CEO Neil Johnson.

“We were delighted to engage with Aurivo throughout the year in support of their fundraising efforts and our community nurses have been involved in health-check programmes for Aurivo staff and at local marts.”

Croí Heart & Stroke charity based in Newcastle is the largest non-profit in the fight against heart disease and stroke in the west of Ireland.

Its work is largely funded through fundraising events, voluntary contributions and philanthropy.

This keeps the doors open at the Heart & Stroke centre as well as funding awareness campaigns and public health events.