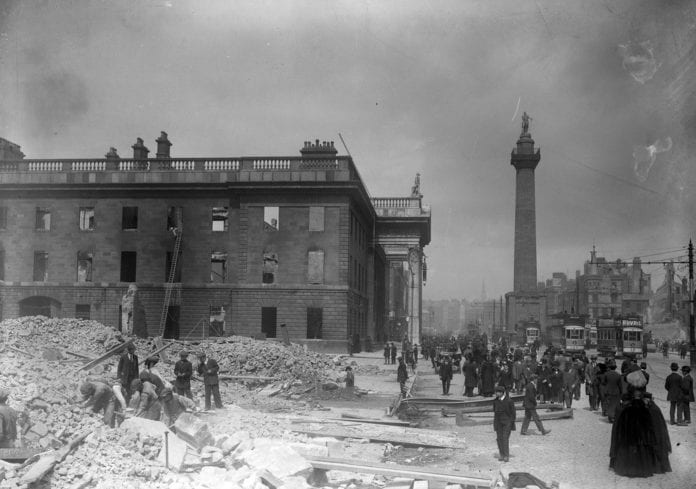 A bilingual 1916 guide book exploring Galway memorials and sites related to 1916 will be launched this Thursday 14 December by Cllr Eileen Mannion, Cathaoirleach of Co. Galway.

Its lengthy title, the Galway County 1916 Rising Heritage Trail: Go Explore the Historic Sites & Memorials, refers to those sites involved in some way in the Rising.

Written and edited by GMIT researchers Dr Mark McCarthy and Dr Shirley Wrynn, and Galway County Heritage Officer Marie Mannion, the book illustrates how memory of 1916 persists to this day.

Éamonn Ceannt was born in Ballymoe and Ros Muc was the summer destination of Patrick Pearse – two of the seven signatories of the 1916 Proclamation.

From 25–29 April 1916, Athenry resident Liam Mellows led hundreds of Irish Volunteers in revolt in the east of Galway County.

They were also joined by women from Cumann na mBan.

Cllr Eileen Mannion said: “The product of extensive fieldwork and archival research, the four trails in this guide book will be a very valuable resource for local people and visitors to the county who have an interest in this very important period of our history.”

Dr Mark McCarthy, who is Lecturer and Programme Chair in Heritage Studies at GMIT, explained: “This major public history initiative is aimed at locals and visitors who wish to learn about the heritage of 1916.

“Descriptions, colour photographs and GPS coordinates are included for each point of interest, as well as fold-out route maps.”

Dr Shirley Wrynn, who works in GMIT’s library, says: “The guide book makes an important contribution to the development of heritage tourism in County Galway, allowing those following the trails to make a personal connection to the historical events which ultimately shaped our country.”

GMIT President Dr Fergal Barry said: “This guide book describes in forensic detail the events and people of County Galway who contributed to the birth of our sovereign republic. It is an educational gem for both the trail finder and for those seeking renewal. In the fullness of time, these trails will become part of the Wild Atlantic Way experience.”