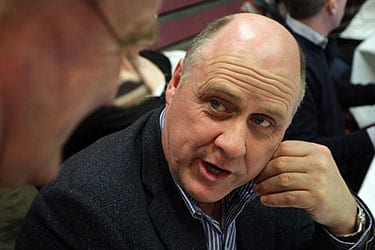 More than 1,200 people have signed a petition calling on Galway West TD Noel Grealish to apologise about alleged comments about African migrants.

At a public meeting in Oughterard on Wednesday about the former Connemara Gateway hotel where the prospect of using it as a centre for asylum seekers was raised, Noel Grealish allegedly said that African migrants were coming to Ireland to sponge off the system.

More than 800 people attended the meeting in Oughterard where there were concerns expressed about using the old hotel to house asylum seekers.

People expressed concerns about a lack of information being given about an refurbishment work being done on the hotel while a tender process is ongoing to find new asylum seeker centres in the west of Ireland.

An online petition started by Social Democrats city councillor Owen Hanley calling on Deputy Grealish to apologise for his comments has attracted over 1,200 signatures as of the time of this article’s publication.

Hanley said that “Racism must be confronted, especially when by a politician” and called on the Deputy to clarify his comments, saying that politicians should avoid stoking fear and division in communities.

The Galway Anti-Racism Network said that Noel Grealish made “hateful racist comments” and called for him to resign.

“Such language is wholly unacceptable, especially from local and national political representatives.”

“Interculturalism should be seen as a strength, not a weakness,” GARN said in a statement, adding that “Gort and Ballyhaunis are positive examples of the benefits that embracing people from different cultures can bring.”

While there was broad opposition to the creation of a Direct Provision centre in Oughterard, but many speakers reportedly said that their only opposition was keeping dozens of asylum seekers in a compound rather than making them part of the community.

Speaking on Today with Sean Ó Rourke Galway West TD Catherine Connolly said that while there were some people who used racist language, that did not reflect the overall feeling of the meeting.

She said that she tried to correct some incorrect facts about migrants and Direct Provision which were being presented at the meeting.

The Independent TD added that she is totally opposed to the “inhuman” Direct Provision system, but was worried about some of the things being told as facts.

While there was palpable anger in the room, Catherine Connolly said that people are mostly concerned about the total lack of public consultation around the development.

Minister Seán Kyne was heckled at one point in the meeting when people deemed his answers to be insufficient.

“The Department of Justice has simply never learned any lessons from debacle after debacle,” Catherine Connolly said. “They are clouded in secrecy and there’s no openness.”

GARN chairperson Joe Loughnane said that “If this is to be a Direct Provision centre, Galway Anti-Racism Network would work to support the community to bring in the resources for the residents of the centre.”

“However, until the plans are confirmed, we share the local’s concerns over the lack of information around this issue.”

GARN added that it agrees with those at the meeting that it would be better for asylum seekers to be accommodated in the community instead of being “warehoused” in Direct Provision centres.