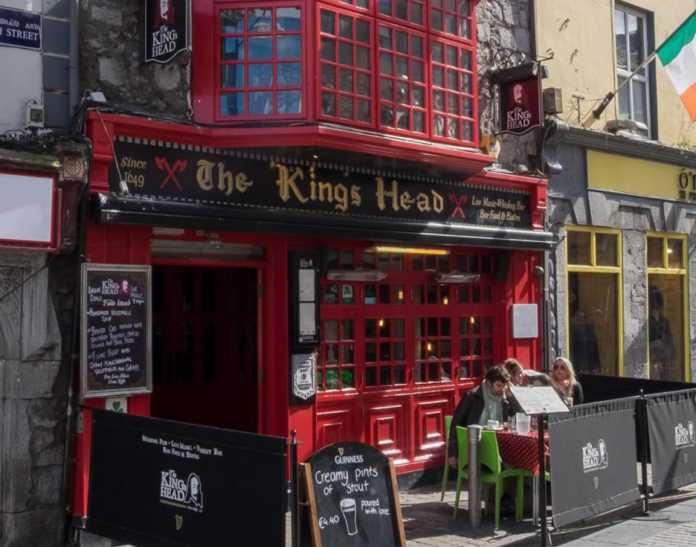 Famed Galway City pub and bistro The Kings Head has been crowned the winner of the 2020 Gradam Sheosaimh Uí Ógartaigh bilingual business award.

The announcement was made this morning by Deputy City Mayor Cllr. Colette Connolly.

Now in its 18th year, the Gradam Sheosaimh Uí Ógartaigh is the longest running award of its kind in the country.

The awards are organised by Gaillimh le Gaeilge, in partnership with the Galway Advertiser, and supported by TG4 and the Galway Chamber.

The Kings Head was named the overall winner of the awards, as well as taking the top spot in the ‘Tourism and Hospitality’ category sponsored by Fáilte Ireland.

Paul Grealish of The Kings Head was absolutely delighted on receiving the news, and said that he and his family love to incorporate Irish into their business as much as possible, to the delight of locals and tourists alike.

“We are very proud of Galway’s status as a bilingual city, and  as a family, we’re conscious of doing all we can to promote the use of the Irish language in our business.

“Our history and heritage are a huge part of what we do. It makes total sense therefore, to use our native language wherever and whenever possible.”

Since 1989, the Kings Head has been inviting people to “Buail Isteach” and making heavy use of Irish in signage and menus, and more recently on their digital screens and social media.

“Locals love to see the Irish. The Irish language has always had a special place in The Kings Head,” Paul said.

But the emphasis on Irish is also a big hit with tourists from all over the world passing through Galway, and the friendly staff are always happy to give them a hand with their pronunciation.

Other proud Gradam award winners were:

A new award was also created this year, the Bronnadh Speisialta na Moltóirí, recognising a first time entrant to the Gradam.

All of the winners received a business package valued at €2,000 from their category sponsor, as well as a replica of Gradam Sheosaimh Uí Ógartaigh.

The Kings Head will also receive advertising and publicity with the Advertiser and TG4, along with a year’s membership to Galway Chamber and Gaillimh le Gaeilge.

Cathaoirleach Ghaillimh le Gaeilge, Bernadette Mullarkey extended her congratulations  to all of the winners.

“All the nominees have done great work which is instrumental in sustaining Galway’s  official bilingual status, comhghairdeas leo ar fad.”