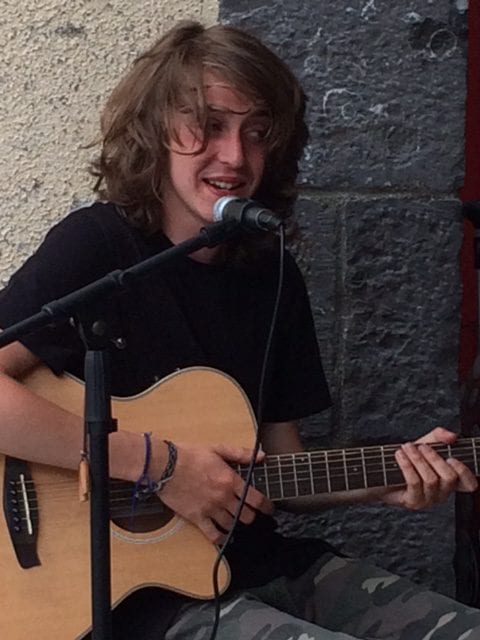 Busking is a way of life in Galway. You can find beginners as young as six, established entertainers and traveling groups.

It’s a place to show off, try your hand at, and share a new approach to all kinds of entertainment. And that’s just what Taran Stakem was doing when I heard him for the first time, a few weeks ago.

He’s a shaggy-haired 21-year old from Galway, with an easy smile and a guitar he plays laying flat on his lap. He calls it lap-style guitar. He’s not by any means the first to turn a guitar and play it in such a percussive way.

But it was the first time I’d ever seen it or heard it. I was thoroughly entranced.

He plays his guitar as a cross between a piano and a drum-kit, plucking strings, tapping the body of the instrument, using his fingers, the palms of his hands an even his elbows.

The result is both dreamlike and fresh, it’s easy to listen to and intriguing to watch. He says he starts with the structure of a few chords and the rest is improvised.

Taran is young, but he is well on his way to building a future on a foundation of experimental music and he’s doing it without hesitation on the streets of Galway.

Erin Meehan Breen is a freelance writer currently living in Galway, Ireland. You can find her work on Erin’s Isle at http://www.ErinMeehanBreen.com.