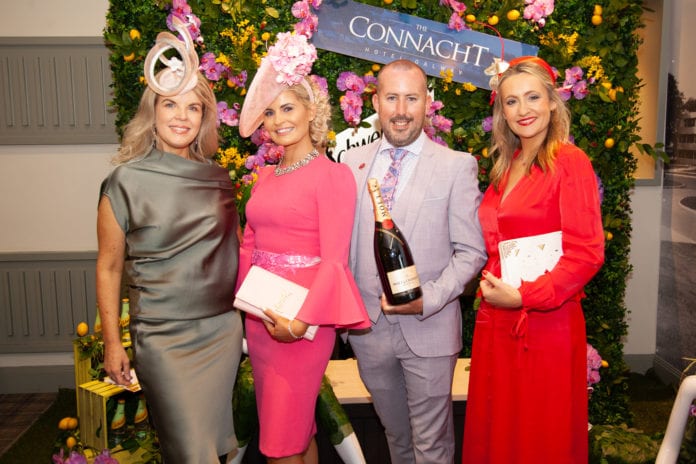 Race week is always a crazy time for the hospitality industry in Galway as visitors pack hotels, bars, and restaurants throughout the city for the world famed celebrations.

It was a particularly busy week for the Connacht Hospitality Group which has put on a week of incredible events that shine a spotlight on everything that makes Race week so well know; high fashion, fun guests, and good craic for all.

The Connacht Hotel opened off the week on Monday morning with a corporate event down at Ballybrit Racecourse before the races began in earnest.

Later on Group General Manager Wayne Neilon and An Taoiseach Leo Varadkar presented the remarkable Jody Townend with her prize for winning the Connacht Hotel QR Handicap on Great White Shark in the big Race on Monday.

That evening An Pucán held their own Best Dressed competition, the first of many to come throughout the week, which was won by Donegal lady Tracy McGuinness.

On Tuesday the hotel was awash with stars as some of RTE’s best know presenters made their annual trip to the Galway Races.

They enjoyed drinks at the hotel and mingled with the many guests before heading on down to the racecourse for their coverage, finishing he night at the 1520 bar in the Latin Quarter.

There were good causes to celebrate as well, as Wednesday saw the success of yet another Bubbles and Brunch event to raise money for ACT for Meningitis.

ACT for Meningitis was founded up in 2011 by Siobhan and Noel Carroll following the tragic loss of their daughter Aoibhe to meningitis when she was just four years old.

The Galway based charity works in 21 counties to promote awareness of this potentially deadly disease and counter misinformation the circulates.

The event which included fashion pop-ups and a delicious three-course meal was attended and supported by Macnas who added colour to the day’s proceedings.

Ladies Day put spotlight back on the fashion stylings of racegoers, as it does race week, with another very successful Best Dressed Lady contest in the Connacht Hotel.

Tv Personality Marietta Doran and leading Galway Milliner Emily Jean were among the judges who picked Sligo lady Corrina Clarke Hayes as the most stylish in what was the highest standard competition to date.

The fabulous prize included a bespoke necklace from Galway’s Or Jewellery, a Brown Thomas Voucher, a magnum of Moet and a stay on Ladies Day 2020.

Friday saw one of Ireland’s top social media influencers James Patrice welcomed at the Connacht hotel, in town to judge the Athlone Town Center Best Dressed Competition out at the Race Course.

There was a hell of a time to be had for all in Galway this week at the 150th annual Galway Races, and people are no doubt already looking ahead to the craic that awaits next year.