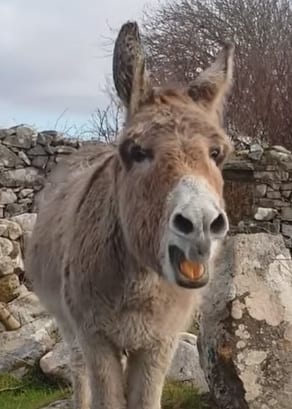 Opera is making a massive comeback online, with the catch that it’s not people bringing it back to the limelight.

Harriet the singing donkey in Connemara has become an overnight success since she was ‘discovered’ in Carraroe.

Local man Martin Stanton recorded Harriet hitting the high notes one morning when he went to bring her food.

Harriet has some trouble with the typical hee-haw donkeys make, but does a wonderful aria.

He first uploaded the video to the Facebook page Ireland From the Roadside.

Since then, people have viewed videos of Harriet’s performance over a million times.

15 year old Stephen McGrath is Harriet’s owner, and has said he’s shocked at the level of fame she’s attracted.

It didn’t take long for Harriet’s viral success to go global as the singing donkey spent much as the week plastered over the US news.

Stanton actually thought that Harriet was a he at first, and called her Harrison.

It was only after Harriet gave birth that he decided that he might have been mistaken.