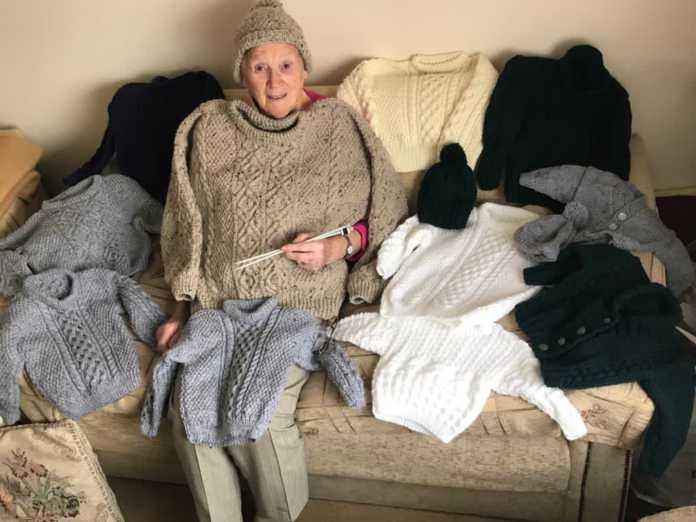 When Helen Griffen joined local online shop Umbrella Eile, the last thing she expected was to feature as the ‘poster girl’ for their Christmas marketing campaign!

The 93-year-old, who first came to work in Galway when she was just 18, is part of Snugglz – a local hand-knit and crochet group which makes unique children’s and baby wear.

And as orders flow in from near and far, the grandmother of ten – who also has six great-grandchildren – is happily knitting away to keep up with demand.

Helen came to work in Galway’s Imperial Hotel many years ago years old before falling in love with a Gort man, whose brother married Helen’s sister!

Since March this year, Helen has been cocooning with her daughter Yvonne.

While isolation has been difficult for many older people particularly this year, being part of this project has proved to be very beneficial, and she shares the proceeds from her sales with the Alice Leahy Trust – a befriending and social health service for the homeless.

Galway City Mayor Mike Cubbard launched Galway’s online marketplace in October and said he was delighted that the community of talented craftspeople has continued to grow steadily since.

With over 45 local businesses and small enterprises in the group, ‘Umbrella Eile’ welcomes members from both Galway City and the County.

“At a time of such uncertainty for local business Umbrella Eile proves that thinking outside the box and supporting one another new avenues will open up,” said the Mayor.

“Local traders and businesses are the backbone of our economy and Umbrella Eile is quickly becoming a one stop shop for all your Christmas gifts.”

Jewellers, chocolate candle and hat makers, fashion designers writers and artists have all come together on this Galway site making it easy for customers to shop locally and buy Irish this Christmas.

Like many marketeers, Umbrella Eile hopes to make their presence felt in a physical space before Christmas and into the New Year.

Check out their website HERE to find out more.