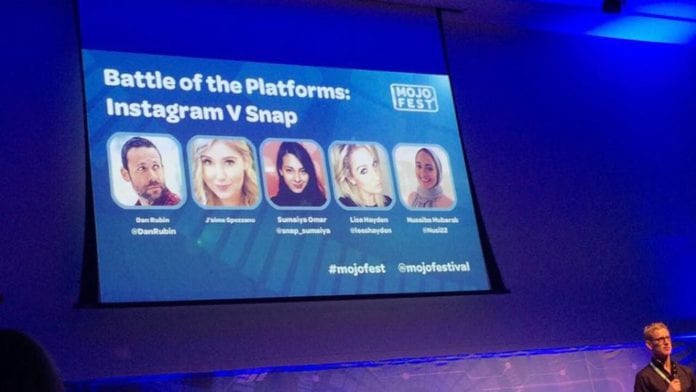 There was a battle of the platforms at MojoFest which took place at NUI Galway this morning, with the panelists talking about which social media platform (Instagram or Snapchat) worked best for them.

A survey was conducted in the Bailey Allen Auditorium using Kahoot, prior to the commencement of the battle and showed Instagram to be the most popular of the two platforms.

J’aime Spezzano, Dan Rubin, Lisa Hayden and Sumaiya Omar all talked in favour of Instagram although Lisa Hayden spoke of the run they had with Snapchat at the beginning.

Lisa Hayden, the Digital Content Manager for Offical GAA spoke of their journey with Snapchat before the ball seemed to burst and they moved over to Instagram.

“As the GAA association is one of the largest amateur sporting bodies in the world we are delighted to be able to show the passion and pride of communities.

“We have tried to find ways to show those stories. Our fans are young and old, super-fans and fair-weather fans.”

“We used to talk at you until Snapchat became the Prodigy Player.

Lisa spoke at how Snapchat provided them with a platform to showcase all the extra’s one might not get to see at GAA games. The Behind the Scenes was their focus and Snapchat allowed this to happen.

That was until they began to have difficulty with getting information from Snapchat.

“It’s nice to know what interaction you’re getting from viewers but Snapchat hadn’t been providing the information.

“Overall the platform is a bit shaky so we decided to move over to Instagram.

“We found Instagram to be of more use, we could create polls, the imagery and of GDPR (General Data Protection Regulation)

“Overall it seems to work very well or us.”

Instagram seemed to be the clear winner today with Snapchat falling off the wagon slightly.

Official GAA are very excited to continue to work with Instagram as they grow their content and behind the scenes videos for their biggest fans. GAA enthusiasts are encouraged to follow Official GAA on Instagram.

MojoFest will conclude tomorrow, with a final panel of speakers but the battle of the platforms continues as we here at Galway Daily would like to know what your preferable platform is – Instagram or Snapchat? You can vote here: