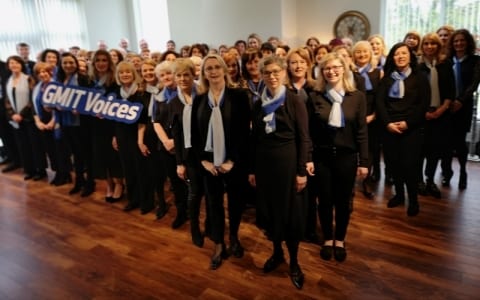 GMIT’s new workplace choir Voice was named the ‘Best Newcomer’ at the annual SCCUL Choir Factor Competition which took place in Clarinbridge over the weekend.

The 65 strong choir took to the stage singing Choir Director Sean Rowland’s own a capella arrangement of “Down to the River To Pray” followed by Katy Perry’s “Rise” with piano accompaniment.

Their efforts were well received by the judges and crowds alike, earning rapturous applause on top of the prize.

Chairperson of the Healthy Campus Committee Anita Mahony said “GMIT Voices has had a wonderful effect on the staff of GMIT and the culture of the Institute.

“Over 100 staff have come to some of our choir practices and more are still planning to join when their schedules are less hectic,” she added.

The sold-out event was in aid of the SCCUL Sanctuary who run tailored therapeutic retreat days for community groups and members of the public who are facing a crisis in their lives or in need of healing.

GMIT’s Voices managed to won over stiff competition from ‘High Fidelity’ from Fidelity Investments and ‘Local Vocals’ from Galway Corporation/Council.

Formed just two months ago as part of the college’s Healthy Campus workplace initiative which promotes positive mental health and wellbeing, GMIT Voices is under the direction of local pianist and teacher Sean Rowland.

“The choir have worked extremely hard and I am so pleased for them. It’s a great boost for the staff and the college itself. This was the choir’s first ever public performance outside of GMIT and I couldn’t be any more proud” said Sean.

Voices are planning further performances, including returning to Choir Factor next year, where it’s hoped that a second group will be taking their place in the newcomer section, as the GMIT students are also planing to launch their own choir come September.