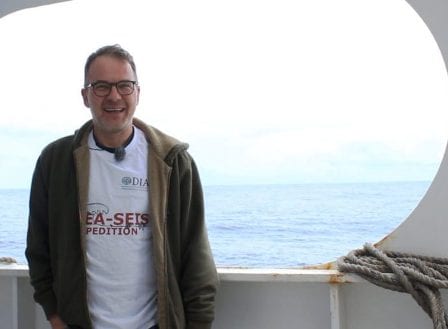 A boundary pushing artistic programme in Galway that looks to ocean exploration and marine science for inspiration finished up a great year aboard the Celtic Explorer.

He was there as part of Aerial Sparks, a four-year artistic project exploring the ocean wilderness, marine science and radio communication.

As an artist who works with sound David was interested in how much of the exploration and research around the deep ocean is done through sound, and how that could play into his work.

“I was interested in exploring the sonic world around the RV Celtic Explorer including recordings made on deck and in the various interior spaces, underwater recordings, and recordings of the vibrations of the ship itself, using special self-designed vibration sensors”

As artist-in-residence, David took part in learning about assembling and testing the Ocean-Bottom-Seismometer units, which were deployed at eighteen locations across the Celtic Sea.

Seismologists collect wave recordings of seismic events to interpret the movements of the earth’s structure, while as an acoustic artist, David gathers wave recordings in order to create compositions.

“Having a keen interest in acoustics, I found that the way seismologists look at waves is actually quite similar to the way I look at them; the main difference being that seismic waves are well below the spectrum of human hearing,” explained David.

“Working with science team has provided me with an amazing opportunity to take the seismic data to discover new ways of making seismic events not only audible but also musical compositions.”

The hidden world on the ocean

Being at sea for that length of time, David said he came to better understand the vastness of the ocean, and all the life it contains.

“Apart from a lot of seabirds, some migrating birds, a few dolphins and a couple of whales, you really don’t know what’s underneath you.”

“I think I had a much more romantic notion going to sea and thinking that experiencing wildlife at sea would be like walking through a busy forest.”

“All of the wildlife is hidden and I didn’t really expect that. It’s actually quite lonely in a way, you’re out there on your own, there’s nothing else apart from water and weather.”

Being at sea on the RV Celtic Explorer, especially during storms, also gave David a better grasp of how the changing environment affects the sounds made by the ship and the sea.

When the swell of waves moves in one direction and the wind in another, the sensation is often called ‘confused sea’, causing erratic pitch and roll, which eventually dislodges a person’s balance and ‘groundedness’.

This constant physical experience heightened David’s perception of the sounds on the ship, which will also will be used in work.

“Listening and feeling the agitated rumbles of the sea during a storm, the cries of the aching ship body resembling a whale song,” he explained

“The wind howling and whistling through the poles and cranes; thunderous clangs of rogue waves hitting us sideways, exciting the steel vessel like a giant resonant bell; the sound of objects rattling and sliding around; moments of zero gravity before being swung forcefully into an unexpected direction, all lends itself to some unforgettable experiences.”

AerialSparks is taking place in collaboration with the Marine Institute for the Galway European Capital of Culture 2020 programme.

Created by visual artist Louise Manifold, artists have been given the opportunity to foster creative connections between art, science and radio anthropology.

The aims is for artist to create compelling stand alone art works for radio broadcast in Ireland and Europe.

The project will run for the next two years with the Marine Institute, with four more artists taking part in ocean surveys in 2019.