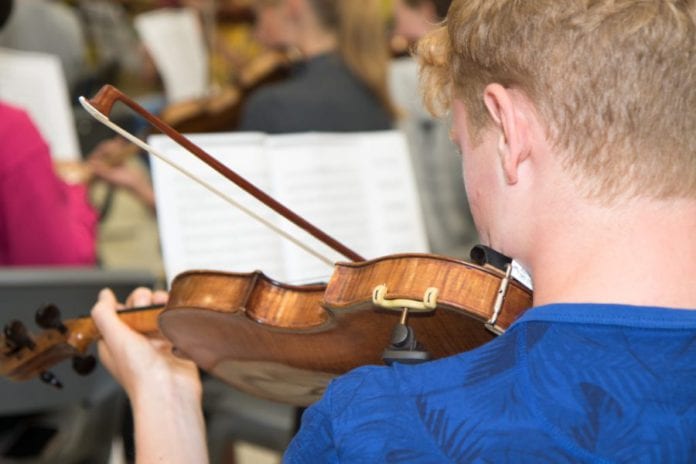 Galway’s first ever youth orchestra Symphonic Waves recently hit a major milestone in its development, performing its first full concert with every section working together.

The string, wind, brass, and percussion sections of the orchestra played together in rehearsal for the first time at Choláiste Bhaile Chláir working on music by Beethoven and Dvorak.

New members were welcomed with a samba drumming workshop with Brian Ferguson from Funky Drums, and the rehearsal finished with a short informal performance.

Symphonic Waves is a West of Ireland Youth Orchestra which was established in 2017 as part of Galway 2020 in collaboration with Music Generation Galway County.

The idea behind came from a need to provide young musicians between 13 and 21 years old across the west of Ireland with a place where they could reach to a higher level and find new opportunities to perform.

These incredibly talented young people have benefited from working with some of the best musicians in the country in Galway’s Contempo Quartet, as well as the Irish Chamber and RTÉ Concert orchestras.

Under the guidance of Prof. James Cavanagh they have been in rehearsals since last July, and this summer will perform their first live symphony orchestra at the end of July.

Galway 2020 Programme Manager Marilyn Gaughan Reddan said that they are delighted to have played a role in bringing this group together.

“It’s great to see Symphonic Waves progressing so wonderfully; the quality of the work of the young musicians who are part of this orchestra is exceptional.”

“This is such an inspiring youth-led project, which will leave a wonderful legacy for young musicians in the west.”