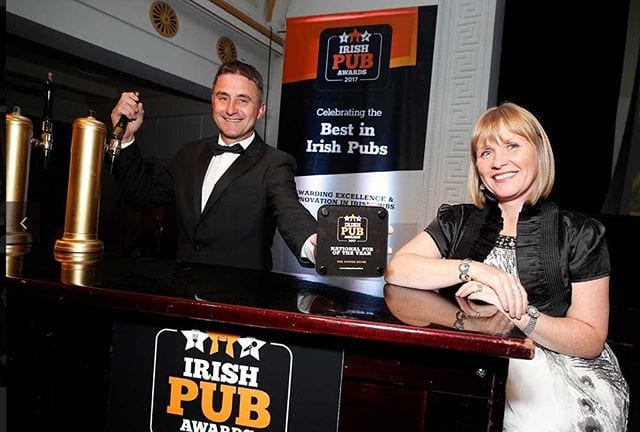 Two thirds of the winners at the Connacht finals of the Irish Pub Awards announced this week were from Galway.

Galway city and county between them took home six awards out of nine categories.

Five of the winners were in Galway city and one was out in Connemara.

An Pucán, on Forster Street was named the Innovative Pub in Connacht this year, while The Quays Bar was declared to be the Best Music Pub in the region.

Congrats to @anpucangalway, Galway City, the winner of Innovative Pub of the Year in the Connaught Region #IrishPubAwards2018 pic.twitter.com/Y8qlkkYIpE

The Best Outdoor Space is at Carroll’s Bar on Dominick Street with its famous Beer Garden.

Where the inexplicable sight of a double-bus is actually a fully functional pizza restaurant, the Crust Bucket, which is currently shortlisted for Best Takeaway Pizza in Ireland.

The Best Newcomer to the pub scene is the 1520 Bar on Quay Street, attached to the Residence Hotel.

We recently described 1520 as having “an old-fahioned look” but with an “energetic vibe” and plenty to feast the eye on.

For the Most Outstanding Customer Service, stop by John Keogh’s The Lockkeeper on Dominick street.

In 2017, John Keoghs was named as one of Irelands top three gastro pubs, Highly Commended in the Yes Chef Awards and as Ireland’s Newcomer Restaurant in the Hotel & Catering Review Gold Medal Awards.

John Keogh’s The Lockkeeper, An Púcán, and Lowry’s are all big winners on the Irish pub scene. At the 2017 Connacht Awards they took home two apiece.

The Connacht winners of the Irish Pub Awards were announced at Maxwell’s Pub in Claremorris, Co. Mayo on Tuesday evening.

“The Irish Pub is at the heart of every town and village and it is where locals gather to meet friends and neighbours for good food and craic.”

“It is where tourists meet locals and enjoy Irish hospitality at its best.”

Mr McCann also said that pubs are a major source of employment in Ireland and that these awards show what pubs can offer to the modern customer.

All the winners from the Regional level will now advance to the National finals of the Irish Pub Awards.

Winners in each category, and an overall Best Pub in Ireland will be named at the RDS Concert Hall on November 21.