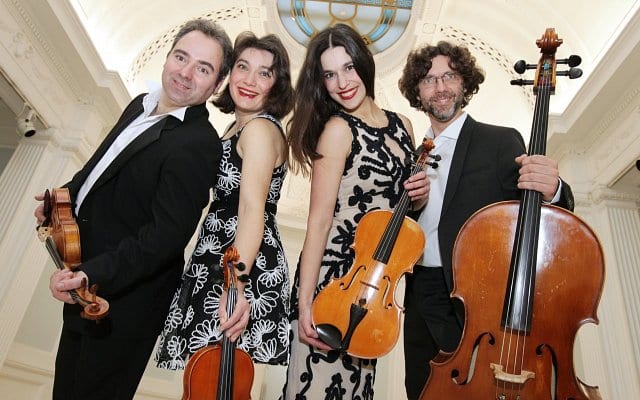 Galway Music Residency’s ConTempo quartet are continuing to bring the music of the continent to the west in the From Europe with Love series.

The ConTempo will perform works from two Portuguese composers, Luís de Freitas and Fernando Lopes-Garça, at the 7th From Europe with Love concert at St. Nicholas’ Collegiate Church on Tuesday from 1:10pm.

Luís de Freitas (1890 – 1955) was born into an aristocratic family with close ties to the Royal family in Portugal.

He began composing as a child and went on to study in Berlin and Paris, later returning to Portugal to become Professor of Composition at the Lisbon Conservatory of Music.

There, he played a pivotal role in revolutionizing music education.

The ConTempo quartet will be performing his Quartet de Cordas, a deeply impressionistic piece that is considered reminiscent of Debussy and Ravel.

That will be followed by Lopes-Garça’s Suite Rústica No. 2.

Lopes-Garça was a member of the Portuguese Communist Party and strongly opposed António de Oliveira Salazar’s right-wing dictatorship of the time.

As his work was repressed and his life made harder because of his opposition to the dictatorship, his music came to take on a style inspired by Portugese folk music.

Suite Rustica No. 2 is considered a fine example of this.

Galway Music Residency is partnering with Caprice Café over the next number of months to offer From Europe with Love audience members a lunch deal.

All you have to do is bring along your performance programme to receive a 10% discount on any meal over €10.

From Europe with Love is a three year initiative celebrating the shared musical heritage of the European Union by exploring the string quartet repertoire from each of its 27 member countries.

The first part of this musical exploration is a nine concerts taking place at St. Nicholas’ on the first Tuesday of each month.