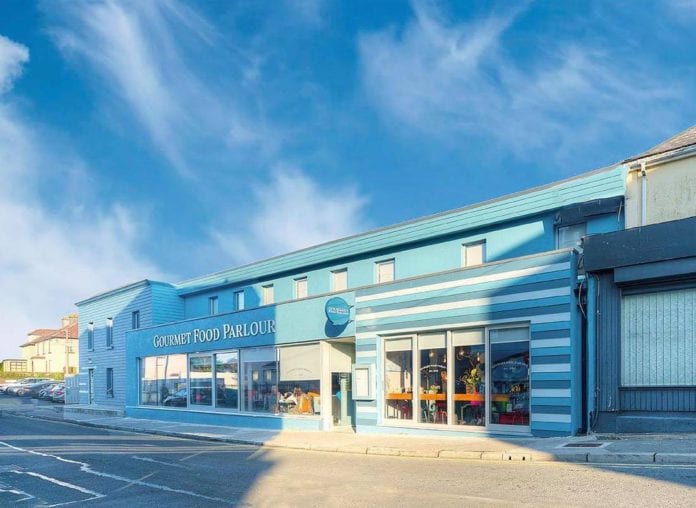 The creak of chairs, clink of glasses, and the screeching where overly enthusiastic cutlery meets protesting plates might be absent from the main floor of Gourmet Food Parlour, but the kitchen is still bustling as the restaurant stays open with a new takeaway service.

Like so many restaurants, cafés and other businesses in the hospitality sector, collection and delivery service  has been an essential lifeline for Gourmet Food Parlour to “keep the spark alive” as founder Lorraine Heskin puts it.

Gourmet Food Parlour first came on the scene in Galway in the summer of 2018, making it younger by far than many of the restaurants that have stood in Salthill for so long they’ve become part of the landscape.

But Lorraine says the local community has been incredibly supportive of them in that time, including both the public and The Village Salthill business group.

Before the current crisis there was a kind of mental separation between restaurant and takeaway food. One is either the kind of cooking you could never do at home, or else home-style cooking taken to that same level, while the other tended towards the terrible-for-you-but-it’s-sooo-good end of the spectrum.

But this lockdown has changed things somewhat, and after more than two months without being able to go out, people are craving something different, which Gourmet Food Parlour can more than cater for.

“We offer burgers and wings, and they are extremely popular. But from our restaurant in Salthill we also make a beautiful Fisherman’s Pie which you can get to take away, we’ve got a gorgeous selection of salads.”

“We’ve got a wide variety of different meals that are not just fried food. Like, our chicken quesadillas are our best seller”.

“What we did was, we designed a new menu based on our bestsellers and what our customers would say are their favourite Gourmet Food Parlour meals or dishes”.

In the weeks since reopening that menu has been tinkered with to add bespoke meal options like a Couple’s Night Out with two starters, two mains, and a bottle of wine, perfect for a night out without the ‘out’ part. Or Brunch boxes for people that want a big breakfast without the hassle of getting up early for it.

Restaurants in the time of Covid-19

Lorraine is a Galway woman herself, from Barna just ten minutes drive from Salthill. On a good traffic day that is.

After establishing several branches of GFP in Dublin, the prospect of opening a restaurant in her home town was a huge draw to her when the Salthill restaurant opened in 2018, and the people of Galway have been just as enthusiastic.

But even before restaurants were ordered to shut in late March of this year, Lorraine had started to see that the reality of the coronavirus pandemic was starting to settle on people’s minds.

“The two weeks prior to the Taoiseach’s announcement there was a sense of nervousness. But also sales started to drop. Not significantly, but steadily. That steady flow you were accustomed to wasn’t there.”

“I just felt on Sunday March 15 that it was the right decision to close down the restaurant and the catering business.”

After that came a period of intense cleaning, which from what I understand from friends who’ve worked in hospitality, is pretty much the default activity when you don’t have anything else to do, along with “donating what we could, freezing what we could” of the leftover stock.

Before the Salthill restaurant could reopen around four weeks ago there was a lot of work to be done in retraining the staff, and putting together a new menu, along with a myriad of other challenges that came with the shift in focus at the business..

“We started small and then we’ve expanded week to week by adding new things or taking away things that might not be working.

With the run of good weather lately, GFP has focused on adding seafood to the menu, always a welcome staple on the west coast, along with iced coffees and smoothies that make a welcome cool treat for people enjoying the sun down in Salthill.

In the early days of the pandemic there was a rush of panic buying at stores that looks even more embarrassing now than it did then, as people were convinced that supplies of certain goods would dry up.

For her part, Lorraine says there was some “marginal” difficulty in securing a few things in April, but that supply changes have improved dramatically in the past month.

There was no capacity for takeout or delivery service of any kind at Gourmet Food Parlour before the pandemic hit. But that said, Lorraine had always intended to make that step when the time came, but didn’t expect it to come until at least the end of 2021.

“So Covid-19 forced us to do that a lot sooner than we had planned, maybe two years sooner. But the difference it has made to our ability to expand the people of Salthill, it has been wonderful to be able to do that.”

“I just felt like we had to fight to keep it going, to keep the spark of Gourmet Food Parlour alive, and fight for jobs and fight for the business”.

When the restaurant first closed on March 15, all of the staff had to be temporarily let go, a scene repeated in many businesses.

Since opening the takeaway service Lorraine has hired back 12 staff at the Salthill restaurant, around half of the full workforce there, and hopes to bring back to the remainder by June 29, when they can start the laborious process of becoming a full service restaurant again.

“That’s the goal, to bring everyone back,” Lorraine states. But there won’t be a simple turning point, where everything goes back to the way it was.

Even with the takeaway option, trade is still considerably lower than it was before the pandemic, and Lorraine acknowledges that they’ve been “decimated” by its impact, like so many in the hospitality industry, and other sectors besides.

Restaurants will still be operating under strict social distancing requirements that will seriously cut into their floor space. Which is why, with bills and staff to pay, she doesn’t see the takeaway service going anywhere soon.

“And I say that in a positive way because I think it has brought a positive element into the business, and we’re enjoying the customer reaction to that.”

And while there will no doubt be more challenges going into the future, many of which will require government support to weather, there is plenty people can do to support business in their area with their own buying power.

“Support your local favourite restaurants and cafés. Give us your support and spread the good word. Word of mouth can be better than any social media post you can ask for.”

To read more about Gourmet Food Parlour, check them out on our Galway Daily restaurants page at https://tinyurl.com/y8au2wjr, where you can order on the Just Eat app, or on just-eat.ie.