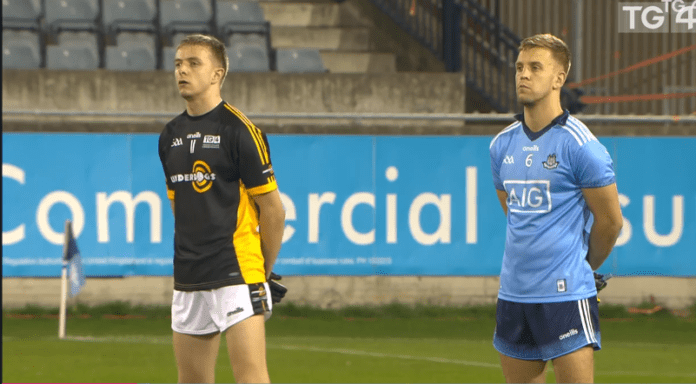 Autumn 2018 saw the return of the Underdogs to the screens of TG4 following a 10 year break.

In 2003, TG4 screened the first ever series of the Underdogs, a series which follows footballers who have never played football at senior inter-county championship level.

2004 was a memorable series as it paved the way for Kieran Donaghy and Pearse O’ Neill to launch their senior inter-county footballing career with their respective counties, Donaghy with Kerry and O’Neill with Cork. Both players have since won Senior All-Ireland Medals with their counties.

This year a sense of excitement could be felt in the air when it was announced that the Underdogs would be back on the screens of TG4 in the autumn; with Paul Galvin, Ray Silke and Valerie Mulcahy as coaches.

Trials for the new Underdogs series were held at Trim, Co. Meath in May and a young man from An Spidéal did his utmost to gain a place on the panel.

The 25 year old, who plays his football with St James’ GAA earned himself a place on the panel and he spoke with Galway Daily about his football and the journey he had with the Underdogs. He also spoke about the football game they played against Dublin on the 19th of October 2018.

Fintan Ó Cuanaigh had an interest in both football and hurling since he could walk and he began playing with his local club in An Spidéal when he was four years old.

Ó Cuanaigh preferred the hurling more so than the football when he was younger and he bought his hurl to secondary school every day but as he was growing up he knew he had to choose one sport over the other.

“Going into secondary school I always bought the hurl with me, people thought I was daft but I suppose when you’re getting older you kind of have to pick one,” said Ó Cunaigh.

“So if you’re going to get far in any sport or to have any opportunities, you would have more of a chance with football, so I focused on the football then after Leaving Certificate.”

He played hurling then for another short period during his college years in UL, where he won an All-Ireland Freshers Medal and then after second year he played with intermediate before ending his time playing hurling to concentrate solely on football.

Ó Cuanaigh spoke with Galway Daily about his reasons for wanting to take part in the Underdogs series,

“I suppose I wanted to get involved because if I’ve any bit of spare time or anything I put it into sport, put it into football, I’m a bit of a freak I suppose,” he laughed.

“Any spare time I’d have I’d be in the gym or out in the pitch by myself or anything like that and I suppose I got a taste of playing county at U21 level under Alan Flynn in 2014 but unfortunately we got beat by Leitrim in the first round.

“We’ d a lot of the team playing that day that won the U21’s All-Ireland the year before, now I wasn’t involved in that team so it was a bit of a freak defeat. I loved the training under Alan Flynn though and the intensity of it. I just loved that kind of environment and testing yourself all of the time and I knew I wanted more. Then I was on the Galway Junior team and then that Summer as well I got brought into the Galway Senior team for a few trials and training sessions but unfortunately never made the breakthrough,” said Ó Cuanaigh.

When the Underdogs came up Ó Cuanaigh grabbed the opportunity and although it was difficult at the beginning going to the trials and all the travelling that had to be done, he really enjoyed it. Especially as the Underdogs team was being coached by three well-known former footballers (Valerie Mulcahy who has 10 All-Ireland medals with Cork, Ray Silke who was captain of the winning 1998 Galway side, and Paul Galvin a former player with Kerry.)

As he spoke about Valerie Mulcahy, Ray Silke and Paul Galvin, Ó Cuanaigh said Galvin had a real impact on him even though he never really thought much of him before the Underdogs series.

“He’s unbelievable just the way he thinks about the game, in ways that no one else has thought about the game I don’t think. He demands high standards and people might have a certain perception about him but he’s very kind and he wants the best out of you. I’ve actually bought his book now and I’m reading it at the minute.”

Part of the Underdogs series entailed training camps throughout the country which meant a lot of travelling for all the players involved as they were playing football matches with their own local clubs as well. The camps weren’t easy with many activities organised on top of football training and each week the Underdogs would play a football game against clubs like Naomh Bríd, The Army, Moorefield the Leinster Champions, Kilcummin and a few more clubs.

Ó Cuanaigh spoke about the injury he got in his shoulder when he was playing against The Army, one of the most physcial games he has ever played. He remembered a lad had come down hard on his shoulder but he continued to play. It was the following morning when he woke and couldn’t move his hand that he knew something was wrong.

“When I couldn’t move my hand I knew something was wrong so I went to the physio and she said to go for an X-Ray but nothing showed up. Then I went for an MRI and it was a torn tendon and bruising in the shoulder so I got a local cortisone injection from my doctor but that didn’t do anything and then I had to get an ultrasound guided one up in Santry and then that done the trick after a week.”

When Ó Cuanaigh first got injured he thought he would only be out for a week or two but in the end it turned out he was out injured for two months and he felt there was a strong chance he would be up for elimination.

In every camp three players are chosen by the coaches and at the end of each camp one of the three gets eliminated so Ó Cuanaigh felt after six weeks of being injured that he could be in trouble and even though he couldn’t train he drove to Kerry for the camp that was on down there.

“There was a camp down in Kerry and I felt that I could be up for the chop if I didn’t go so I went down just trying to help with the drills and stuff and then we’d a championship match with the club up in Kenny Park in Athenry against Cortoon and I couldn’t play in it obviously.

“I came up for that and drove down the next morning to Kerry to watch the Underdogs play again even though the selectors told me not to but I suppose maybe it was a fear of missing out or something and the banter with the lads. Then obviously I drove back up on Sunday after the Underdogs match, so ya maybe I’m a bit mad in the head,” Ó Cuanaigh laughed, “but the dedication is there anyways.”

Ó Cuanaigh was only back a few days before the big match against Dublin. Four lads who had gotten game time in the All-Ireland Final were part of the Dublin team that the Underdogs played, Michael Fitzsimons, Eoin Murchan, Johnny Cooper and Conor McHugh and it was Ó Cuanaigh who marked Johnny Cooper in the game.

The Dublin team had only two training sessions prior to the game and one of the players informed Ó Cuanaigh on how they keep up to date and how they make sure they are all in tune with one another.

“They have a database where they all buy into and even if you’re not on the first team or the second team you’re still involved and you know what’s going on so lads at home might know the game plan better than the lads playing so that opened my eyes to a lot of things.”

The performance of Ó Cuanaigh on the night against Dublin has been spoken about a lot as he was one of the players on the Underdogs team that seemed to see plenty of ball time although he said he wasn’t fully happy with his own performance on the night.

“A lot of people were saying I was on the ball a lot but I wasn’t even fully happy with my own performance especially the mistakes. Dropped a free short, missed a goal chance, there the things I’ll always look back on, being kind of hard on yourself. I was content enough with the performance but the result was bad.”

Ó Cuanaigh mentioned the atmosphere in Parnell Park on the night of the match where a crowd of up to 5,000 attended the game. He said the noise when they got behind the teams was class and it was the largest crowd he had ever played in front of.  Playing in Croke in an All-Ireland would have 20 times the crowd which puts immense pressure on the players.

Ó Cuanaigh really enjoyed his journey with the Underdogs and although they didn’t get the result they wanted  against Dublin it’s clear the young star is dedicated to football.

The future seems bright for the young footballer, a player to look out for as he tries to pave his way forward with his footballing ability and 100% dedication.