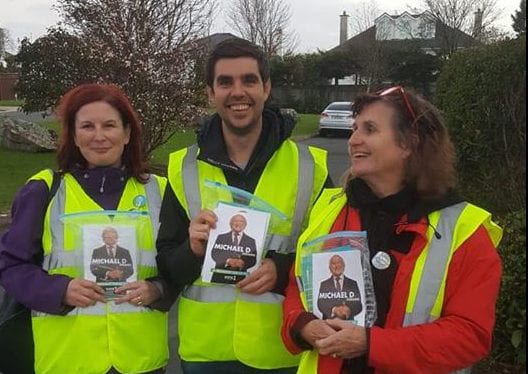 It was a breezy Tuesday night in Knocknacarra. The cross party campaign group “Galway for Higgins” were canvassing for the incumbent President. Galway Daily tagged along to get a feel for the response to Higgins and whether the polls have been accurate.

The canvass team was made up of members of the Social Democrat and Labour party. It was made clear however that this isn’t a party political group.

One home owner remarked how she was planning on telling off one of the canvassers for knocking too hard but then saw he was canvassing for Michael D and immediately warmed to, and embraced him. Another home owner reminisced about his personal friendship with Michael D stemming back years.

The recurrent theme was one of approval for Higgins and a determination to turn out and vote. For those that were home, house after house confirmed their intention to vote Higgins.

In what was a total of two estates, there was just one voter who swiftly rejected Higgins and shut her door. Apart from that anomaly it was house after house of quick fire praise for the job Michael D has done with little consideration for any other candidate.

It is notable one homeowner questioned Higgins not appearing at the debate on Monday night and spoke of her concern about his age. Despite these reservations, she declared the other candidates haven’t done much for her so she’d vote for Michael D.

Canvasser Niall Ó Tuathail, while pleased with the reception to Michael D, was quick to caution in pointing out how polling can get it wrong. Niall alluded to the Brexit referendum and US Presidential election as evidence for the potential horrors of complacency. Ó Tuathail illustrated the importance of turning out to vote on the day.

All in all, it became clear quickly the sheer scale of the mountain other candidates need to climb to come close to Higgins in Galway. Galway City as expected is Michael D’s stomping ground and Knocknacarra evidences this flawlessly. Although Michael D has received concerns about his age and criticisms about his absenteeism for debates, these blemishes seem to be of no concern to the people of Knocknacarra.